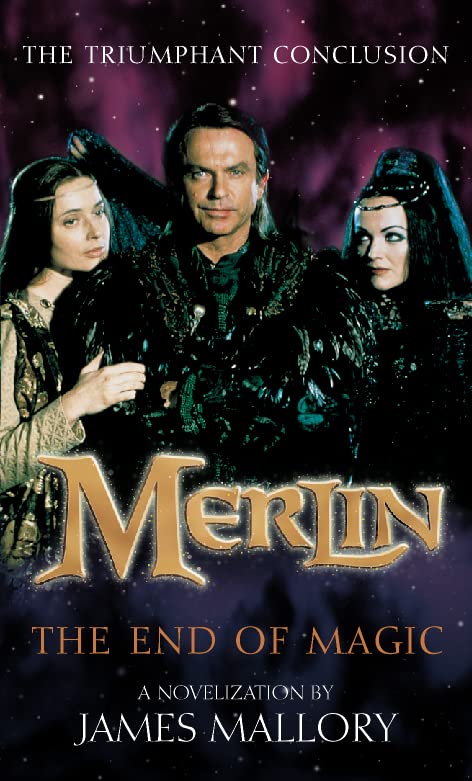 The End of Magic
by James Mallory

The final novel in the series inspired by the phenomenal mini-series MERLIN - the Arthurian legend told on a grand and epic scale!

The End of Magic Summary

The End of Magic (Merlin) by James Mallory

The final novel in the series inspired by the phenomenal mini-series MERLIN - the Arthurian legend told on a grand and epic scale!

MERLIN is the Arthurian legend with a difference - this time, the famous myth is told from Merlin's point of view. It is above all a love story, following the wizard's quest for the enchantress Nimue. He must use sorcery to battle the evil Queen Mab, cunning Morgan Le Fey, and tyrannical Lord Vortigern, seeking ways to end the bloodshed which has plagued England since the Christians first clashed with the followers of the old ways.

The traditional elements of the legend - the incestuous conception of Mordred, the founding of the Round Table, Queen Guinivere's infidelity with Lancelot, the quest for the Holy Grail - all contribute to the emerging struggle between Merlin and the dark forces which threaten all of England. Ultimately, Merlin must choose between his love for Nimue and his sworn loyalty to Arthur, Camelot and his people.

This 4-part mini-series which took the US by storm was a huge success in the UK as well. And with what a cast: Sam Neill, Sir John Gielgud, Isabella Rossellini, Miranda Richardson, Rutger Hauer, Helena Bonham-Carter, Martin Short and James Earl Jones.

James Mallory is the pseudonym of an award-winning sf and fantasy writer.

GOR001628918
The End of Magic (Merlin) by James Mallory
James Mallory
Merlin
Used - Very Good
Paperback
HarperCollins Publishers
2000-04-17
272
0006512917
9780006512912
N/A
Book picture is for illustrative purposes only, actual binding, cover or edition may vary.
This is a used book - there is no escaping the fact it has been read by someone else and it will show signs of wear and previous use. Overall we expect it to be in very good condition, but if you are not entirely satisfied please get in touch with us.