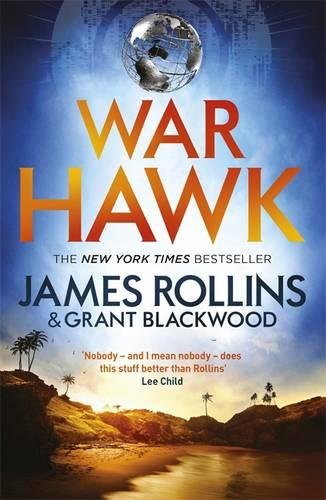 Used Price
$18.99
inc. GST
Free Shipping in Australia
Army Ranger Tucker Wayne and his war dog Kane return in the thrilling new novel from the author of MAP OF BONES and THE KILL SWITCH.
Very Good

A Former Army Ranger Tucker Wayne and his war dog Kane are thrust into a global conspiracy that threatens to shake the foundations of American democracy in this second exciting Sigma Force spinoff adventure from New York Times bestselling authors James Rollins and Grant Blackwood.

Tucker Wayne's past and his present collide when a former army colleague comes to him for help. She's on the run from brutal assassins hunting her and her son. To keep them safe, Tucker must discover who killed a brilliant young idealist - a crime that leads back to the most powerful figures in the U.S. government.

From the haunted ruins of a plantation in the deep South to the beachheads of a savage civil war in Trinidad, Tucker and Kane must discover the truth behind a mystery that leads back to World War II, to a true event that is even now changing the world . . . and will redefine what it means to be human.

With no one to trust, they will be forced to break the law, expose national secrets, and risk everything to stop a madman determined to control the future of modern warfare for his own diabolical ends. But can Tucker and Kane withstand a force so indomitable that it threatens our very future?

'Nobody - and I mean nobody - does this stuff better than Rollins''The modern master of the action thriller' - Providence Journal-Bulletin'Rollins excels at combining action and history with larger-than-life characters . . . A must for pure action fans' - Booklist'A spiralling, high-octane adventure . . . Rollins is clearly at the top of his game'

James Rollins is the author of the bestselling Sigma Force series, a string of standalone thrillers and the novelisation of the cinema blockbuster INDIANA JONES AND THE KINGDOM OF THE CRYSTAL SKULL. His books are sold in more than 30 countries and have sold ten million copies worldwide. An amateur spelunker and scuba enthusiast, James holds a doctorate in veterinary medicine from the University of Missouri. He currently lives and writes in Sacramento, California.

Find out more at www.jamesrollins.com and follow James at @jamesrollins

GOR007751926
War Hawk by James Rollins
James Rollins
Used - Very Good
Paperback
Orion Publishing Co
2016-04-21
384
1409154483
9781409154488
N/A
Book picture is for illustrative purposes only, actual binding, cover or edition may vary.
This is a used book - there is no escaping the fact it has been read by someone else and it will show signs of wear and previous use. Overall we expect it to be in very good condition, but if you are not entirely satisfied please get in touch with us.