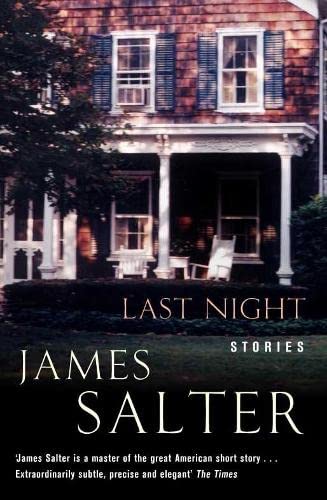 Out of Stock
$21.49
inc. GST
A haunting symphony of desire, memory and loss from an American master of fiction
Very Good
Only 0 left

In ten exquisite stories, Salter portrays men and women in their most intimate moments. The title piece, in which a translator assists agonizingly in his wife's suicide even as he performs a last betrayal, has already been hailed 'a masterpiece, clearly and without question'.

`He has written three books that everyone should read before they die . . . Last Night is a deeply gratifying reminder of what reading is for' Independent

`There is a steady hum of eroticism beneath his narrative and in the voluptuous restraint of his style. What else can I say? I highly recommend it' Daily Telegraph

'James Salter is a master of the great American short story . . . Extraordinarily subtle, precise and elegant' The Times

James Salter is the author of numerous books, including the novels Solo Faces, Light Years, A Sport and a Pastime, The Arm of Flesh (revised as Cassada), and The Hunters; the memoirs Gods of Tin and Burning the Days; the collections Dusk and Other Stories, which won the 1989 PEN/Faulkner Award, and Last Night, which won the Rea Award for the Short Story and the PEN/Malamud Award; and Life Is Meals: A Food Lover's Book of Days, written with Kay Salter. He died in 2015.

GOR001735954
Last Night: Stories by James Salter
James Salter
Used - Very Good
Paperback
Pan Macmillan
2007-03-02
144
0330448501
9780330448505
N/A
Book picture is for illustrative purposes only, actual binding, cover or edition may vary.
This is a used book - there is no escaping the fact it has been read by someone else and it will show signs of wear and previous use. Overall we expect it to be in very good condition, but if you are not entirely satisfied please get in touch with us.