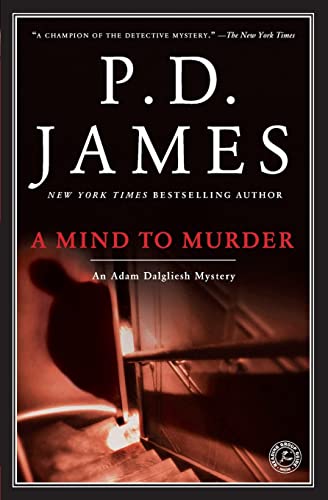 Mind to Murder, A
by James

Used Price
$20.49
inc. GST
Free Shipping in Australia
In this second mystery featuring Scotland Yard investigator Adam Dalgliesh, the administrative head of the Steen Psychiatric Clinic is found dead with a chisel in her heart and a weird, wooden phallic symbol in her arms.
Reviews:
Trustpilot
Well Read

Mind to Murder, A Summary

Mind to Murder, A by James

On the surface, the Steen Psychiatric Clinic is one of the most reputable institutions in London. But when the administrative head is found dead with a chisel in her heart, that distinguished facade begins to crumble as the truth emerges. Superintendent Adam Dalgliesh of Scotland Yard is called in to investigate and quickly finds himself caught in a whirlwind of psychiatry, drugs, and deceit. Now he must analyze the deep-seated anxieties and thwarted desires of patients and staff alike to determine which of their unresolved conflicts has resulted in murder and stop a cunning killer before the next blow.

Customer Reviews - Mind to Murder, A

Mind to Murder, A Reviews

"One of the finest, most absorbing craftsmen of the profession."-- "The Washington Post"
"One of the most chilling crime writers around."-- "Observer"

P. D. James (1920-2014) was born in Oxford in 1920. She worked in the National Health Service and the Home Office From 1949 to 1968, in both the Police Department and Criminal Policy Department. All that experience was used in her novels. She won awards for crime writing in Britain, America, Italy, and Scandinavia, including the Mystery Writers of America Grandmaster Award and the National Arts Club Medal of Honour for Literature. She received honorary degrees from seven British universities, was awarded an OBE in 1983 and was created a life peer in 1991.

GOR008959064
Mind to Murder, A by James
James
Used - Well Read
Paperback
Simon & Schuster
2001-06-05
256
0743219589
9780743219587
N/A
Book picture is for illustrative purposes only, actual binding, cover or edition may vary.
This is a used book. We do our best to provide good quality books for you to read, but there is no escaping the fact that it has been owned and read by someone else previously. Therefore it will show signs of wear and may be an ex library book.