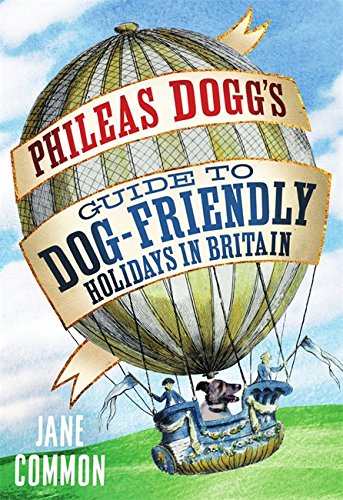 In Stock
$20.89
inc. GST
A travel guide to the United Kingdom, written by dogs - for dogs.
Very Good
8 in stock

A canine guide to British holidays, seeking out the best dog-friendly days out, beaches, hotels, pubs, campsites, cottages and holidays. An amusing and informative guide, illustrated with photos of different dogs, from pedigrees to mutts, at various locations around Britain.

The book builds on the success of the website www.phileasdogg.com, which has been running for 18 months and has a mailing list and social media following in the thousands. The site's main canine correspondent is Attlee, aka Phileas Dogg, a three year old Battersea mongrel, owned by freelance journalist Jane Common. As well as Attlee, the site is written by a team of Rover Reporters from as far afield as the Shetland Isles and Cornwall.

In the short time it's been running, the site has been picked up by The Evening Standard and The Guardian - "even if you don't have a dog we urge you to read this"; Waitrose Weekend, Prima, Real People and Dogs Today magazines as well as generating local paper stories around the country, in places where Phileas has visited. Jane has been invited on to BBC Radio as an expert in dog travel and worked with Visit England, the Kennel Club and Battersea Dogs and Cats Home to promote dog-friendly holidays and days out.

Superb guide to dog-friendly holidays . . . unusual and beautifully written. * Our Dogs *
We love Phileas Dogg's Guide to Dog-Friendly Holidays in Britain . . . anyone thinking of taking their dog on holiday should read this book first and make sure to pack it in their suitcase. It's wonderfully browsable. * Pets Magazine *
'This book is an indispensable guide to dog-friendly holidays in the UK . . . don't plan your next adventure without it.' * The Independent *

Jane Common is a freelance journalist and writes real life stories, travel features and in-depth reports for publications such as Cosmopolitan, Prima, Red and Take a Break. She edits the pets' pages of Real People and also has a regular column in Horse and Countryside magazine about dog-friendly travel. In her 20-year journalistic career, she has been editor of the weekly supplement of the Daily Star Sunday - Take5 - as well as Deputy Editor of Time Out Istanbul and starred in a BBC1 documentary about women's magazines. Several of her poems and short stories have been published in anthologies and she has collaborated on a book of London's best dog walks.

GOR005706087
Phileas Dogg's Guide to Dog Friendly Holidays in Britain by Jane Common
Jane Common
Used - Very Good
Paperback
Little, Brown Book Group
2014-05-15
288
1472112601
9781472112606
N/A
Book picture is for illustrative purposes only, actual binding, cover or edition may vary.
This is a used book - there is no escaping the fact it has been read by someone else and it will show signs of wear and previous use. Overall we expect it to be in very good condition, but if you are not entirely satisfied please get in touch with us.