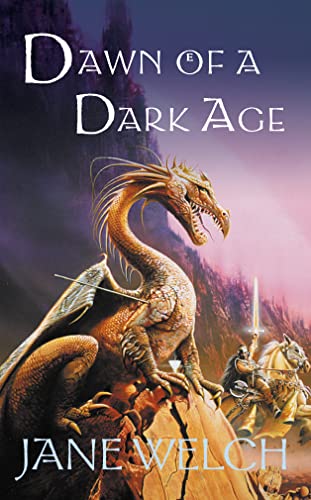 Dawn of a Dark Age
by Jane Welch

Dawn of a Dark Age Summary

Dawn of a Dark Age: Book One of the Book of Man Trilogy by Jane Welch

Prince Rollo's world is shattered by the death of his mother, Queen Ursula. But even before he can grieve he faces the bitter disappointment of being overlooked as his mother's heir in favour of his younger sister; as only the female line in Artor's Royal family inherit the magical power to control the Great Bears of Artor (a talent every sovereign must possess). Seething with self loathing, grief and disappointment Rollo focuses his anger and resentment upon his father.

Deeply concerned for his son Spar decides to leave his daughter, now Artor's Queen, and take 13 year old Rollo half way across the world to Torra Alta, his barony in Belbidia, to claim the only birthright left to him.

But fifteen years have passed since Spar left Hal and Brid as guardians of his remote fortress and in the intervening years, many things have changed. Beasts of legend have grown in strength and will. A huge golden dragon plagues the mountains and swarms of Hobs ransack the fertile plains of Belbidia.

Fourteen years ago the Chalice of OEnd, was lost. A sacred artefact with the power to transfer the magic of one object to another the chalice is the only explanation for the rising threat. If this powerful weapon has fallen into the wrong hands the dawn of a dark age will come to Belbidia.

Dawn of a Dark Age Reviews

Praise for Jane Welch:
"A blockbuster fantasy"
SFX
"As intriguing as anything Tolkien dreamed up."
Starburst
"Wonderful author, in the Robert Jordan mould"
The Bookseller

After working in Heffers Booksellers for a short while and running her own small business, Jane Welch and her husband Richard left England to spend five winters teaching skiing in Andorra. Here she completed her first novel, The Runes of War, the first book in The RuneSpell trilogy, which was published in Dec 1995, The Lost Runes in October 1996 and The Runes of Sorcery in May 1997. Her second trilogy - set in the same world of Belbidia - The Book of OEnd, was published by Earthlight in 1999/2000.

GOR001109516
Dawn of a Dark Age: Book One of the Book of Man Trilogy by Jane Welch
Jane Welch
Used - Very Good
Paperback
HarperCollins Publishers
2001-07-02
560
0007112491
9780007112494
N/A
Book picture is for illustrative purposes only, actual binding, cover or edition may vary.
This is a used book - there is no escaping the fact it has been read by someone else and it will show signs of wear and previous use. Overall we expect it to be in very good condition, but if you are not entirely satisfied please get in touch with us.