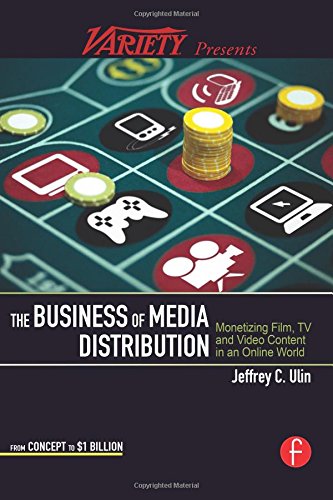 Shows how related media distribution markets, including television, video and online, work together and independently to finance and maximize profits on productions. This book demystifies how an idea moves from concept to profits and how distribution quietly dominates an industry otherwise grounded in high profile elements.

Written by the insider who headed sales for Lucasfilm across distribution markets and managed the release of Star Wars Episode III, this is the first book to show how all related media distribution markets, including television, video and online, work together and independently to finance and maximize profits on productions. It demystifies how an idea moves from concept to profits and how distribution quietly dominates an industry otherwise grounded in high profile elements (production, marketing, creative, finance, law).

The book provides a unique apprenticeship to the business, illuminating at a macro level how an idea can move from concept to generating $1 Billion, relating theory and practice in the context of the maturation of global market segments, and exposing the devil in the detail that impacts bottom line profits.

Producers, media executives, students and entertainment attorneys in specific niches will benefit from this wide-ranging look at the business across various distribution outlets, including theatrical, video, television, online, merchandising, video-on-demand, etc. This book is officially endorsed by Variety magazine.

Anyone who wants to know more about how films and TV shows are distributed and exploited can learn a huge amount from this book.

The entertainment industry is an industry with ongoing challenges with constant change. Jeff provides a road map to see where you are going by understanding where you started.

Ulin expertly depicts the fl uid nature of content creation and distribution in a concise and understandable way. There's never been a better insider's look at the choices and challenges that studio executives face every day.

Jeff Ulin's book is a must read for practitioners, academics and potential investors in the new media space. Having worked in all segments of the industry, Ulin brings together a unique combination of experience and analytical rigor to deconstruct the driving forces of an industry in dynamic change.

This is the book that everyone in the business has been waiting for - Jeff's seen it all, and has written a must-read book for those wanting to understand the jigsaw of media distribution and in what ways the web is infl uencing how, when and where money is made.

Every Silicon Valley start-up working with Hollywood needs to know what Jeff knows. With his knowledge, you're better able to fast forward the future of online video. Without it, you risk being stuck on pause.

Jeff Ulin's background includes being a media executive, attorney, lecturer, and entrepreneur. Half of his 20 years in the business have been at Lucasfilm, where he headed worldwide distribution for all markets (theatrical, video, TV, online), managed franchise sales for Star Wars and Indiana Jones, and oversaw the release of the last Star Wars film, Episode III. He also helped Paramount and Universal's overseas video distribution venture; co-founded and ran animation studio Wild Brain, where he created Disney's pre-school hit Higglytown Heroes; and he currently teaches the class Media & Entertainment: Economics, Policy, and Strategy at Berkeley's Haas School of Business. Living in the San Francisco area, he is at the center of Internet activity, helping companies navigate the convergence of digital media at Silicon Valley's most renowned law firm (Wilson Sonsini Goodrich & Rosati).
Market Opportunity and Segmentation -- the Diverse Role of Studios and Networks; Intellectual Property Assets: The Business of Creating, Protecting, Marketing and Communicating an Idea; Financing Production: Networks and Studios as Venture Capitalists; Phases of Production and Key Financial Issues in Talent Agreements (e.g., Director, Actor, Writer); Theatrical Distribution; The Home Video Business and DVD Distribution; Television Distribution; Internet Distribution, Downloads and Mobile Phone Applications- A New Paradigm; Ancillary Markets Distribution--Hotels, Airlines, Pay-Per-View, etc.; Merchandising -- Product Licensing, Promotional Partners, and Other Franchise Revenues; Marketing and Its Symbiotic Role Across the Distribution Chain; Making Money'Net Profits and Hollywood Accounting
GOR003684288
9780240812007
024081200X
The Business of Media Distribution: Monetizing Film, TV and Video Content in an Online World by Jeff Ulin (Former head of worldwide distribution for Lucasfilm, San Francisco, CA, USA)
Jeff Ulin (Former head of worldwide distribution for Lucasfilm, San Francisco, CA, USA)
American Film Market Presents
Used - Very Good
Paperback
Taylor & Francis Ltd
2009-10-21
528
N/A
Book picture is for illustrative purposes only, actual binding, cover or edition may vary.
This is a used book - there is no escaping the fact it has been read by someone else and it will show signs of wear and previous use. Overall we expect it to be in very good condition, but if you are not entirely satisfied please get in touch with us
Trustpilot