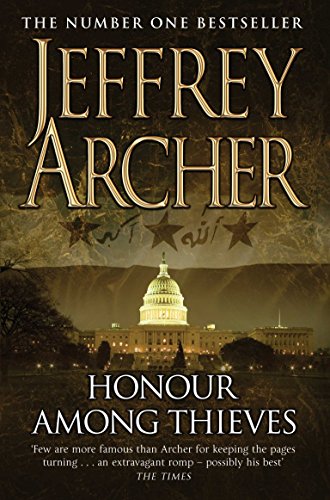 Honour Among Thieves
by Jeffrey Archer

In Stock
$11.49
+10% GST
An unrelenting quest to prevent what would undoubtedly be the most humiliating day in U.S. history.
Very Good Good
8 in stock

Honour Among Thieves by Jeffrey Archer

Who would pay a billion dollars to humiliate America?

The time, 1993. The place, Washington DC. Of the adversaries in the Gulf War, the sole survivor is Saddam Hussein. And Saddam is planning a revenge so diabolical that the United States will be left with no choice but to retaliate . . .

Honour Among Thieves has a wickedly paced political plot, full of all the twists and turns you can expect from bestselling author, Jeffrey Archer.

A fast-moving intrigue . . . a cracking good read. This is the first novel I have read by Jeffrey Archer; it will not be the last * Mail on Sunday *
Back in top form . . Archer's imagination at its most sublime . . . an entertaining, pacey page-turner * Sunday Times *
Few are more famous than Archer for keeping the pages turning . . . an extravagant romp - possibly his best * The Times *

GOR002661382
Honour Among Thieves by Jeffrey Archer
Jeffrey Archer
Used - Very Good
Paperback
Pan Macmillan
2010-11-05
416
0330518895
9780330518895
N/A
Book picture is for illustrative purposes only, actual binding, cover or edition may vary.
This is a used book - there is no escaping the fact it has been read by someone else and it will show signs of wear and previous use. Overall we expect it to be in very good condition, but if you are not entirely satisfied please get in touch with us.