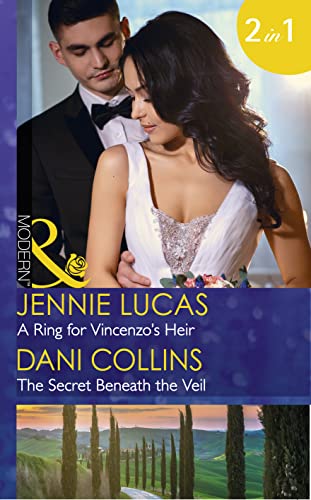 A Ring For Vincenzo's Heir
by Jennie Lucas

A Ring for Vincenzo's Heir

Scarlett Redwood takes an enormous risk interrupting Vincenzo Borgia's wedding. He's rich and powerful, whereas she's penniless and alone but she needs his help... to protect their unborn child!

A Ring For Vincenzo's Heir Summary

A Ring for Vincenzo's Heir

Scarlett Redwood takes an enormous risk interrupting Vincenzo Borgia's wedding. He's rich and powerful, whereas she's penniless and alone but she needs his help... to protect their unborn child!

Vincenzo's furious that Scarlett kept the pregnancy from him, but to claim his heir he has no other option than to make her his wife.

Scarlett hadn't imagined a 24 carat diamond would feel so heavy; it weighs on the ache in her heart. Because she might not get the one, truly priceless, thing she desires...For his heart is off limits!

The Secret Beneath the Veil

With five little words, Mikolas Petrides secures a vital business merger, and finally repays his grandfather for rescuing him from the horrors of his childhood. But, when he lifts his new bride's veil, it's not the woman he was expecting!

Viveka Brice will do anything to protect her little sister, even pretend to marry a stranger. Her deception revealed, she flees the wedding, but is soon confronted by Mikolas. He is a man who always get what he wants, and if the marriage is off, Viveka will have to compensate him - by becoming his mistress instead!

Jennie Lucas's parents owned a bookstore and she grew up surrounded by books, dreaming about faraway lands. At twenty-two she met her future husband and after their marriage, she graduated from university with a degree in English. She started writing books a year later. Jennie won the Romance Writers of America's Golden Heart contest in 2005 and hasn't looked back since. Visit Jennie's website at: www.jennielucas.com When Canadian Dani Collins found romance novels in high school she immediately wondered how one trained for such an awesome job. She began writing, trying various genres, but always came back to her first love, Harlequin Presents. Often distracted by family and 'real' jobs, she continued writing, inspired by the romance message that if you hang in there you'll reach a happy ending. In May of 2012, Harlequin offered to buy her manuscript in a two book deal. She is living happily ever after.

GOR007750526
A Ring For Vincenzo's Heir: A Ring for Vincenzo's Heir / The Secret Beneath the Veil (Mills & Boon Modern) (One Night With Consequences, Book 24) by Jennie Lucas
Jennie Lucas
One Night With Consequences
Used - Very Good
Paperback
HarperCollins Publishers
2016-08-11
384
0263921298
9780263921298
N/A
Book picture is for illustrative purposes only, actual binding, cover or edition may vary.
This is a used book - there is no escaping the fact it has been read by someone else and it will show signs of wear and previous use. Overall we expect it to be in very good condition, but if you are not entirely satisfied please get in touch with us.