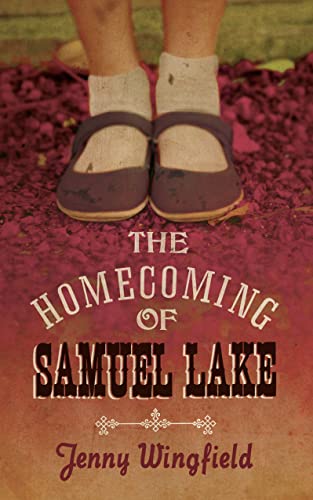 The Homecoming of Samuel Lake
by Jenny Wingfield

A bewitching debut novel in the vein of the much-loved classic Fried Green Tomatoes at the Whistlestop Cafe.

The Homecoming of Samuel Lake Summary

The Homecoming of Samuel Lake by Jenny Wingfield

A bewitching debut novel in the vein of the much-loved classic Fried Green Tomatoes at the Whistlestop Cafe.

It's 1956 and Samuel Lake, a handsome preacher, is voted out of his ministry by yet another congregation, disappointed by his relentless pleas for them to live more charitable lives. Out of options and out of pocket, Samuel and his family are forced to move in with their Arkansas in-laws, the rambunctious Moses clan.

At first they thrive in the unruly sea of relatives - Willa, Samuel's wife, runs the bar for Grandma Calla, while the boys, Noble and Bienville, run riot through the surrounding countryside. But when Swan, their formidable but loveable 11-year-old tomboy, crosses the path of neighbour Raz Ballenger, things take a turn for the worse.

Raz Ballenger, horse trainer, is a man who rules both his family and his animals through terror. Used to instant obedience, he is insulted when Swan leaps to his son's defence, an act that sets a whole chain of unexpected and terrible events into motion...

The Homecoming of Samuel Lake Reviews

`With a teeming cast of memorable characters and an often heartbreaking story line, this gracefully written novel is sure to appeal broadly... it is the work of a born storyteller and a good choice for bookclubs' Booklist

`Readers will lift up their hands in praise of this layered, old-fashioned tale of sin, grace and retribution. "The Homecoming of Samuel Lake" has a supreme cast of characters including a flawed but righteous daddy, a makes-your-skin-crawl villain, and the sassiest, truest girl heroine this side of Scout Finch. Can I get an "Amen"?' Susan Rebecca White, author of A SOFT PLACE TO LAND and BOUND SOUTH

`Jenny Wingfield's richly detailed account of good and evil in 1950s Arkansas will captivate anyone who treasures the values of faith and honesty that are a part of America's rural past. Wingfield's sense of people and place is uncanny. After reading "The Homecoming of Samuel Lake", you too, will believe in miracles' Sandra Dallas, New York Times best-selling author of PRAYERS FOR SALE and WHITER THAN SNOW

Jenny Wingfield is an accomplished screenwriter. Her credits include The Man in the Moon (starring Reese Witherspoon), as well as The Outsider (starring Naomi Watts). She lives in Texas and this is her first novel.

GOR002881510
The Homecoming of Samuel Lake by Jenny Wingfield
Jenny Wingfield
Used - Very Good
Hardback
HarperCollins Publishers
2011-07-01
336
0007348142
9780007348145
N/A
Book picture is for illustrative purposes only, actual binding, cover or edition may vary.
This is a used book - there is no escaping the fact it has been read by someone else and it will show signs of wear and previous use. Overall we expect it to be in very good condition, but if you are not entirely satisfied please get in touch with us.