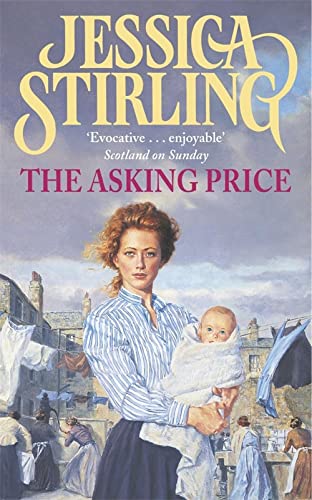 The Asking Price
by Jessica Stirling

In Stock
$13.49
inc. GST
The second compelling novel in the trilogy begun with THE GOOD PROVIDER
Very Good Good
Only 1 left

Imprisoned in a false 'marriage' and trapped in Glasgow's mean streets, Kirsty and Craig Nicholson are drifting apart, held together only by their son, Bobby. Kirsty finds herself drawn more and more to David Lockhart, the young minister who cares for her deeply. But David is bound to return to China and only his love for Kirsty keeps him in Scotland. Craig, now a committed policeman, is incensed by the behaviour of his family when they fall under the influence of a rich and generous patron, and seeks solace in the arms of a street woman from the burgh's dark slums. His growing obsession with her threatens not only Kirsty, but the future of his family too . . .

Born in Glasgow, Jessica Stirling is the author of many heartwarming novels, most of which have Scottish backgrounds. She has enjoyed a highly successful career since The Spoiled Earth was published in 1974.

GOR000846451
The Asking Price: Book Two by Jessica Stirling
Jessica Stirling
The Nicholson Quartet
Used - Very Good
Paperback
Hodder & Stoughton General Division
2000-06-01
416
0340766344
9780340766347
N/A
Book picture is for illustrative purposes only, actual binding, cover or edition may vary.
This is a used book - there is no escaping the fact it has been read by someone else and it will show signs of wear and previous use. Overall we expect it to be in very good condition, but if you are not entirely satisfied please get in touch with us.