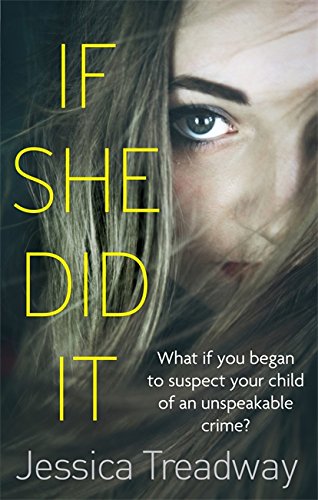 If She Did It
by Jessica Treadway

Did you discover The Husband's Secret?
Did you discuss We Need to Talk About Kevin?
You'll be desperate to find out...
IF SHE DID IT

If She Did It Summary

If She Did It by Jessica Treadway

What if you began to suspect your child of an unspeakable crime?

One night changed everything. A father murdered in his bed. A mother beaten almost to death. A daughter who claims she knew nothing about her boyfriend's murderous plans. But is she telling the truth?

Hanna can't remember the details of what happened that traumatic night, she barely survived the brutal assault that left her a widow. However, if she is to keep her husband's killer in jail, she knows she has to try. But Hanna hadn't realised that those memories may cause her to question everything she thought she knew about her daughter...

If She Did It Reviews

If you were one of the millions who were captivated by the deftly plotted guessing game that was Gone Girl - then treat yourself to this equally beguiling and just as pitch-black thriller... Great characters, a smart plot, full of heart and feeling. Brilliant. * Sunday Mirror *
Treadway paints a devastating portrait of a family torn apart from both the outside and within. * Publishers Weekly *
An intricately plotted psychological thriller...the story of a mother trying to figure out what happened to her family and why. * Chicago Tribune *
A riveting read * Sunday Canberra Times *

Jessica Treadway is a novelist and short-story writer interested primarily in the psychological lives of characters who may be hiding things from themselves. A former news reporter for United Press International, she published her first book of stories in 1992, followed by her first novel in 2001 and a second collection, winner of the Flannery O'Connor Award for Short Fiction, in 2010. Most of her work is realistic fiction about families. Jessica is a professor of creative writing at Emerson College in Boston.

GOR007185503
If She Did It by Jessica Treadway
Jessica Treadway
Used - Very Good
Paperback
Little, Brown Book Group
2015-12-03
400
0751555266
9780751555264
N/A
Book picture is for illustrative purposes only, actual binding, cover or edition may vary.
This is a used book - there is no escaping the fact it has been read by someone else and it will show signs of wear and previous use. Overall we expect it to be in very good condition, but if you are not entirely satisfied please get in touch with us.