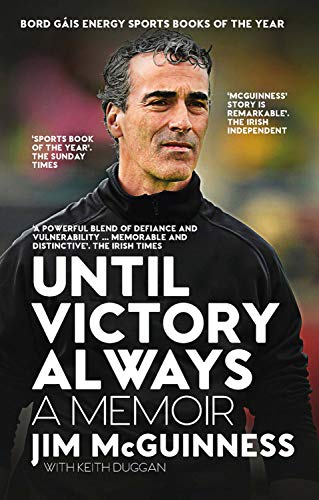 Until Victory Always
by Jim McGuinness

A moving and honest meditation on the nature of sportsmanship, dedication and what it means to lead.

Until Victory Always: A Memoir by Jim McGuinness

'Sports Book of the Year' The Sunday Times

'A powerful blend of defiance and vulnerability ... memorable and distinctive.' The Irish Times

Before Jim McGuinness took over as manager of the Donegal senior football team in the summer of 2010, they were in GAA wilderness. When he stepped down just over four years later, the same group of players had won three Ulster championships, the All-Ireland title of 2012 and succeeded in overturning a century-old perception of how Gaelic football should be played. His departure also marked the end of a personal odyssey, which had begun almost three decades earlier and weathered the aftermath of two family tragedies.

A sports classic, Until Victory Always is both an unforgettable account of McGuinness's years at the helm of the Donegal team and a moving testament to the power of sport to sustain us in our darkest moments.

'A story about how the rawness of grief could end up inspiring not just a man but a county. The story is good; the prose is better.' The Sunday Times

'A story of inspiration, dedication and courage.' The Sunday Independent

Jim McGuinness is an Irish sports coach and manager. His four-year period at the helm of the Donegal senior team, a county with which he won an All-Ireland medal as a player in 1992, ranks as one of the most successful in the sport's recent history. He currently occupies the position of Performance Consultant with Celtic FC. He lives with his wife, Yvonne, and five children, Toni-Marie, Mark Anthony, Jimmy, Bonnie and Aoibh, in Glenties, Co. Donegal.

Keith Duggan is from Donegal and has been twice awarded Sports Journalist of the Year. He is currently Chief Sports Writer with The Irish Times. Previous books include The Lifelong Season and House of Pain.