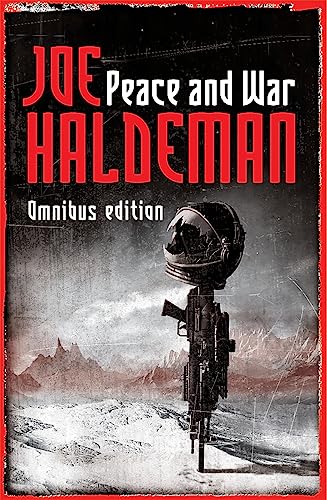 Peace And War by Joe Haldeman

Together in one volume for the first time ever - the classic novel of epic future conflict THE FOREVER WAR, its sequel FOREVER FREE, and the companion novel FOREVER PEACE

Together in one volume for the first time ever - the classic novel of epic future conflict THE FOREVER WAR, its sequel FOREVER FREE, and the companion novel FOREVER PEACE

FOREVER WAR
William Mandella is a reluctant hero, fighting in a distant interstellar war against unknowable and unconquerable aliens. But his greatest test will be returning to Earth. A few months of his tour of duty equate to centuries on his homeworld, during which he becomes increasingly isolated from the world he has been fighting to protect.

FOREVER FREE
Mandella returns home for the last time - to find humanity has evolved into a group conciousness which excludes him. Alone, alienated and missing the certainties of combat, he and his fellow verterans search for an escape - and finally look towards space.

FOREVER PEACE
A war is raging, fought by indestructible machines operated remotely by soldiers miles away - and for soldiers like Julian Class, war is truly hell. So when he and his companion, Dr Amelia Harding, uncover something which could take the universe back to square one, the prospect isn't so much terrifying, as terrifyingly tempting ...

Joe Haldeman was born in Oklahoma in 1943 and studied physics and astronomy before serving as a combat engineer in Vietnam, where he was severely wounded and won a Purple Heart. The Forever War was his first SF novel and it won both the Hugo and Nebula awards, a feat which The Forever Peace repeated. He is also the author of, among others, Mindbridge, All My Sins Remembered, Worlds, Worlds Apart and Worlds Enough and Time.
GOR009338986
9780575079199
0575079193
Peace And War: The Omnibus Edition/Forever Peace, Forever Free, Forever War by Joe Haldeman
Joe Haldeman
Gollancz S.F.
Used - Like New
Paperback
Orion Publishing Co
2006-11-09
704
N/A
Book picture is for illustrative purposes only, actual binding, cover or edition may vary.
The book has been read, but looks new. The book cover has no visible wear, and the dust jacket is included if applicable. No missing or damaged pages, no tears, possible very minimal creasing, no underlining or highlighting of text, and no writing in the margins
Trustpilot