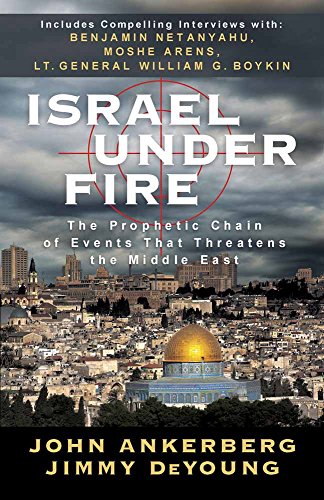 Israel Under Fire
by John Ankerberg

Israel Under Fire: The Prophetic Chain of Events That Threatens the Middle East by John Ankerberg

Israel Under Fire has the key ingredients for readers who track today's news, scriptural predictions, and Israel:

Readers will gain unparalleled insight into the massive historical currents converging on Israel...and promising to generate inescapable consequences for the West.

Author, conference speaker, and journalist/host on Day of Discovery, Jimmy DeYoung has his finger on the pulse of the world's hot spot, the Middle East. He uncovers and evaluates the latest news with a unique blend of political, biblical, and prophetic insight heard daily on Internet and over 800 radio stations. With John Ankerberg, Jimmy has coauthored Israel Under Fire; his documentary on the preparations for the Third Temple, Ready to Rebuild, has become a bestseller.

John Ankerberg, host of the award-winning John Ankerberg Show, has three earned degrees: an MA in church history and the philosophy of Christian thought, an MDiv from Trinity Evangelical Divinity School, and a DMin from Luther Rice Seminary. He has coauthored the 2-million-selling Facts On series of apologetic books, as well as Taking a Stand for the Bible and Israel Under Fire.

GOR003100556
Israel Under Fire: The Prophetic Chain of Events That Threatens the Middle East by John Ankerberg
John Ankerberg
Used - Very Good
Paperback
Harvest House Publishers,U.S.
2009-09-01
224
0736925848
9780736925846
N/A
Book picture is for illustrative purposes only, actual binding, cover or edition may vary.
This is a used book - there is no escaping the fact it has been read by someone else and it will show signs of wear and previous use. Overall we expect it to be in very good condition, but if you are not entirely satisfied please get in touch with us.