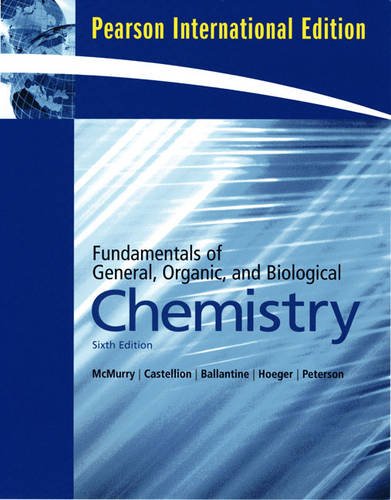 This best-selling text bears the hallmark of all John McMurry's books. On style, it is concise and avoids the `wordiness' of most GOB texts. On substance, it is unusual in its balance of chemical concepts to explain the quantitative aspects of chemistry, and provides greater depth of insight into the theoretical chemical principles. This makes for a wider spectrum of the different angles from which to view chemistry, and thus, captures a greater number of students who can successfully learn from the book. Demanding, yet logical, it also sets itself apart by requiring students to master concepts before they can move on to the next chapter.

John McMurry: educated at Harvard and Columbia, has taught approximately 17,000 students in general and organic chemistry over a 30-year period. A Professor of Chemistry at Cornell University since 1980, Dr. McMurry previously spent 13 years on the faculty at the University of California at Santa Cruz. He has received numerous awards, including the Alfred P. Sloan Fellowship (1969-71), the National Institute of Health Career Development Award (1975-80), the Alexander von Humboldt Senior Scientist Award (1986-87), and the Max Planck Research Award (1991).

Dr. David S. Ballantine, Jr., received his B.S. in Chemistry in 1977 from the College of William and Mary in Williamsburg, VA., and his Ph.D. in Chemistry in 1983 from the University of Maryland at College Park. After several years as a researcher at the Naval Research Labs in Washington DC he joined the faculty in the Department of Chemistry and Biochemistry of Northern Illinois University, where he has been a professor for the past twenty years. He was awarded the Excellence in Undergraduate Teaching Award in 1998, and was recently named the departmental Director of Undergraduate Studies. In addition, he is the faculty advisor to the NIU Chemistry Club, an ACS Student Affiliate program.

Carl A. Hoeger received his BS in Chemistry from San Diego State Unversity and his Ph.D. in Organic Chemistry from the University of Wisconsin, Madison in 1983. After a postdoctoral stint at the University of California, Riverside, he joined the Peptide Biology Laboratory at the Salk Institute in 1985 where he ran the NIH Peptide Facility while doing basic research in the development of peptide agonists and antagonists. During this time he also taught general, organic, and biochemistry at San Diego City College, Palomar College, and Miramar College. He joined the teaching faculty at UCSD in 1998. Dr. Hoeger has been teaching chemistry to undergraduates for over 20 years, where he continues to explore the use of technology in the classroom. In 2004 he won the Paul and Barbara Saltman Distinguished Teaching Award from UCSD. His is currently the General Chemistry coordinator at UCSD, where he is also responsible for the training and guidance of the Chemistry and Biochemistry departments' 100 + teaching assistants.


Dr. Virginia E. Peterson received her B.S. in Chemistry in 1967 from the University of Washington in Seattle, and her Ph.D. in Biochemistry in 1980 from the University of Maryland at College Park. Between her undergraduate and graduate years she worked in lipid, diabetes and heart disease research at Stanford University. Following her Ph.D. she took a position in the Biochemistry Department at the University of Missouri in Columbia, and is an Associate Professor. Currently she is the Director of Undergraduate Advising for the department and teaches both senior capstone classes and biochemistry classes for non-science majors. Awards include both the college level and the university-wide Excellence in Teaching Award and, in 2006, the University's Outstanding Advisor Award and the State of Missouri Outstanding University Advisor Award. Dr. Peterson believes in public service and in 2003 received the Silver Beaver Award for service from the Boy Scouts of America.

1. Matter and Life
1.1 Chemistry: The Central Science
1.2 States of Matter
1.3 Classification of Matter
1.4 An Example of a Chemical Reaction
1.5 Chemical Elements and Symbols
1.6 Elements and the Periodic Table

29. Body Fluids
29.1 Body Water and Its Solutes
29.2 Fluid Balance
29.3 Blood
29.4 Plasma Proteins, White Blood Cells, and Immunity
29.5 Blood Clotting
29.6 Red Blood Cells and Blood Gases
29.7 The Kidney and Urine Formation
29.8 Urine Composition and Function
GOR005971671
9780138152284
0138152284
Fundamentals of General, Organic, and Biological Chemistry: International Edition by John E. McMurry
John E. McMurry
Used - Good
Paperback
Pearson Education (US)
2009-02-01
992
N/A
Book picture is for illustrative purposes only, actual binding, cover or edition may vary.
This is a used book - there is no escaping the fact it has been read by someone else and it will show signs of wear and previous use. Overall we expect it to be in very good condition, but if you are not entirely satisfied please get in touch with us
Trustpilot