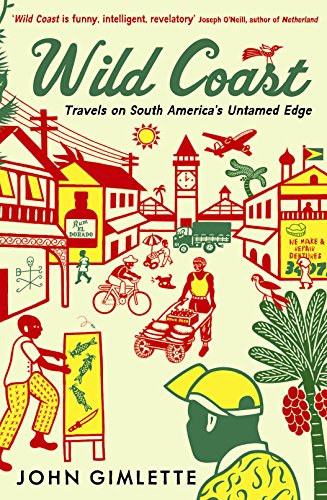 Used Price
$20.99
inc. GST
Free Shipping in Australia
Between the Orinoco and the Amazon lies a fabulous forested land, barely explored. Much of Guiana seldom sees sunlight, and new species are often tumbling out of the dark trees. Beautiful and occasionally brutal, it is one of the great forgotten corners of the Earth: the Wild Coast. The author sets off along this coast, gathering up its story.
Very Good Good

Dolman Travel Book of the Year 2012 Between the Orinoco and the Amazon lies a fabulous forested land, barely explored. Much of Guiana seldom sees sunlight, and new species are often tumbling out of the dark trees. Shunned by the conquistadors, it was left to others to carve into colonies. Guyana, Suriname and Guyane Francaise are what remain of their contest, and the 400 years of struggle that followed. Now, award-winning author John Gimlette sets off along this coast, gathering up its astonishing story. His journey takes him deep into the jungle, from the hideouts of runaway slaves to penal colonies, outlandish forts, remote Amerindian villages, a 'Little Paris' and a space port. He meets rebels, outlaws and sorcerers; follows the trail of a vicious Georgian revolt, and ponders a love-affair that changed the face of slavery. Here too is Jonestown, where, in 1978, over 900 Americans, members of Reverend Jones's cult, committed suicide. The last traces are almost gone now, as the forest closes in. Beautiful, bizarre and occasionally brutal, this is one of the great forgotten corners of the Earth: the Wild Coast.

A completely fascinating book. It opens up a forgotten corner of the world with tremendous flair and shrewd observation -- William Boyd
Wild Coast is funny, intelligent, revelatory * Joseph O'Neill, author of Netherland *
A moving, often humorous, and thoroughly enjoyable account that works as both a wartime recollection and travelogue * Booklist *
Great for those interested in Guyanese history, or those looking to explore a South America far from the well-trodden Gringo trail -- Ianthe Butt * Real Travel *
Gimlette has an eye for a juicy story, a willingness to embark on harebrained journeys and a gleeful way with similes, all of which makes this an entertaining introduction to a forgotten corner of the globe. -- Siobhan Murphy * Metro *
Gimlette is an old-school traveller, very British, very cheery. A barrister by trade, the author has an uncanny ability to nail down his characters with a few well-chosen words... Gimlette brings history to life. He artfully merges assiduous research with a storyteller's gift. -- Oliver Balch * Guardian *
A fascinating journey... Gimlette's extensive research has given him access to an intoxicating level of detail. -- Tom Hawker * Wanderlust *
John Gimlette is sure to secure a name for himself as both a talented writer and a rare traveller who, as documented in the dark chronicles of his book, has visited South America's wild coast and returned apparently unscathed. Fortunately, his writing sculpts an interesting narrative too, and he conveys the region's horror stories with a healthy dose of humour, knowledge, sincerity and poetry... As with all good travel books, the pace of Gimlette's investigations and the idiosyncratic nature of his discoveries, no matter how small, are infectious enough to ensure his account holds its own against these literary greats. * Traveller *
Remarkable... Gimlette is, refreshingly, an unfailing enthusiast... Wild Coast is driven by extraordinary dedication, an insatiable curiosity in everything and an enormous empathy for other people. Gimlette's descriptions of landscapes are often hauntingly beautiful, his sense of humour is engagingly dead-pan... His book is characterised by a thoroughness of research that puts most travel writers to shame... a lucid and lively account of a multi-cultural history... A reminder... of the way in which travel literature can still fulfil its role of bringing to life some of the world's unjustly neglected corners. -- Michael Jacobs * Spectator *
Writing that races you through faster than you can turn the pages, a story that transports you to a place you barely knew about before, and all done with a relaxed nonchalance which totally disregards the tough travels John Gimlette's Dolman Award winner clearly involved. Before reading Wild Coast my Guianas knowledge could be summarised as 'don't drink the Kool-Aid, don't end up on Devil's Island, but do go there for an Ariane space launch.' I'm way better informed today. -- Chairman of the judges * Tony Wheeler *
Fabulously vivid and absorbing -- John Walsh * Independent on Sunday *

John Gimlette has travelled to over sixty countries and has published several books to critical acclaim, including At the Tomb of the Inflatable Pig and is a winner of the Shiva Naipaul Memorial Prize. He contributes regularly to radio and print media including the Guardian, Telegraph, The Times, Independent, Wanderlust and Geographical.

GOR004162574
Wild Coast: Travels on South America's Untamed Edge by John Gimlette
John Gimlette
Used - Very Good
Paperback
Profile Books Ltd
2012-02-23
384
1846682533
9781846682537
Winner of Dolman Best Travel Book Award 2013 (UK)
Book picture is for illustrative purposes only, actual binding, cover or edition may vary.
This is a used book - there is no escaping the fact it has been read by someone else and it will show signs of wear and previous use. Overall we expect it to be in very good condition, but if you are not entirely satisfied please get in touch with us.