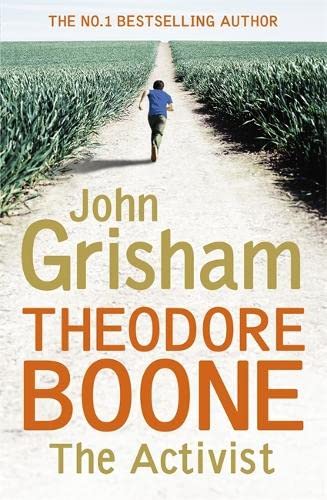 John Grisham delivers high intensity legal drama for a new generation of readers in the fourth novel in his bestselling Theodore Boone series.

Theodore Boone, young lawyer, has had a lot to deal with in his thirteen years, everything from kidnapping to murder.

But he's come through it all and, with the law on his side, justice has always prevailed.

Sometimes, though, the law doesn't seem so just. His friend Hardie Quinn is about to have his family home bulldozed to make way for a bypass. Hardie is not the only one affected: other homes, businesses and schools lie in the path of the road. Theo has to tell his friend the bad news: for once, the law isn't on his side, and there's very little anyone can do to end the destruction.

Theo joins the campaign to stop the road. But when he stumbles on a terrible secret about the corrupt men behind the plan - a secret it is illegal for him to know - Theo must figure out how to keep the developers from breaking the law... without breaking it himself.

If you aspire to turn your children into lawyers who will keep you in your old age, John Grisham's Theodore Boone, his first novel for young people, might be for you. * Sunday Times *
Nobody does legal fiction better. * Daily Express *
Not since Nancy Drew has a nosy, crime-obsessed kid been so hard to resist. * The New York Times *
Gripping... I would recommend this book to anyone who loves a good mystery. I think everyone will be enthralled by Theodore Boone. * Scholastic News *
A master of his craft. * The Guardian *
John Grisham is the author of twenty-five novels, one work of non-fiction, one collection of short stories, and four novels for young readers. His works are translated into thirty-eight languages. He lives in Virginia and Mississippi.
GOR004821090
Theodore Boone: The Activist: Theodore Boone 4 by John Grisham
John Grisham
Theodore Boone
Used - Very Good
Paperback
Hodder & Stoughton
2013-05-23
304
1444728946
9781444728941
N/A
Book picture is for illustrative purposes only, actual binding, cover or edition may vary.
This is a used book - there is no escaping the fact it has been read by someone else and it will show signs of wear and previous use. Overall we expect it to be in very good condition, but if you are not entirely satisfied please get in touch with us.
Trustpilot