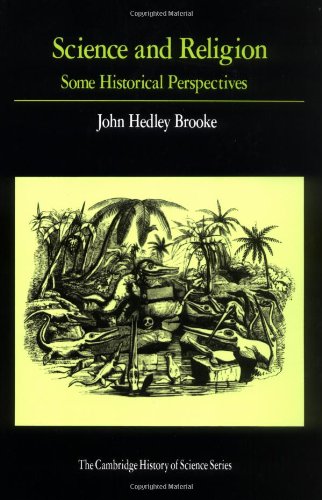 In Stock
$11.49
+10% GST
In this 1991 volume, John Hedley Brooke offers an introduction and critical guide to one of the most fascinating and enduring issues in the development of the modern world: the relationship between scientific thought and religious belief. A special feature of the book is that Brooke stands back from general theses affirming 'conflict' or harmony'.
Very Good
Only 1 left

Science and Religion: Some Historical Perspectives by John Hedley Brooke

In this 1991 volume, John Hedley Brooke offers an introduction and critical guide to one of the most fascinating and enduring issues in the development of the modern world: the relationship between scientific thought and religious belief. It is common knowledge that in western societies there have been periods of crisis when new science has threatened established authority. The trial of Galileo in 1633 and the uproar caused by Darwin's Origin of Species (1859) are two of the most famous examples. Taking account of recent scholarship in the history of science, Brooke takes a fresh look at these and similar episodes, showing that science and religion have been mutually relevant in so rich a variety of ways that no simple generalizations are possible. A special feature of the book is that Brooke stands back from general theses affirming 'conflict' or harmony', which have so often served partisan interests. His object is to reveal the subtlety, complexity, and diversity of the interaction as it has taken place in the past and in the twentieth century.

"An excellent introduction to [the important] question--what is the historical relation between science and religion...This well-crafted book also contains an extensive and useful bibliography essay." New Scientist
"In his impressive and thoughtful book, John Hedley Brooke, a historian of science, stands back from the contention and shows how history can illuminate the relationship of science and religion." Geoffrey Canto, Times Literary Supplement
"...a book which I read with great profit and can recommend to teachers and students of the relation between science and religion. It is in many respects the best study of the history of the interplay of Christian theology and modern science that I have come across." Peter Byrne, ????
"...brilliant, intellectually exciting....a `must' for anyone interested in science, in religion, and in our Western intellectual tradition." Spirituality Today
"This is an astonishing book about one of the most important problems facing our culture. Down the ages, the relationship of science to philosophy and religion has changed in countless ways. The main theme of this book is the almost unbelievable subtlety, complexity and diversity of this relationship. One cannot help but admire the author's vast reading, his penetrating critical power, his grasp of detail and his ability to summarize." H.N.V. Temperley, Nature
"...well written and will repay the attention that it demands by providing a fine background in the history of science as it has been affected by the historical progress of religious thought in the West." Gordon Stein, The American Rationalist
"...I have no hesitation in saying flatly that every scholar in our discipline, and many others as well, should benefit from reading this work." Edward B. Davis, Isis
"He has given us a brilliant, perceptive, subtle, nuanced analysis, which will permanently alter the way scholars and the informed lay public view the relations of science and religion. It is up to the rest of us to build on the foundation that Brooke has provided." David Lindberg, Metascience
"John Hedley Brooke's latest book is arguably the most important historical analysis of science and religion since Andrew Dickson White's History of the Warfare of Science with Theology in Christendom appeared nearly a century ago....the starting place for all future discussions of the subject." Ronald L. Numbers, Metascience
"...an admirable historical survey...Brooke admirably criticizes historiographical methods that describe the relations of science and religion in an undimensional fashion...Historians of the modern era have in this volume one of the best surveys of science and religion available in English. One pedagogical advantage is that it forces the reader to evaluate differing interpretations of the history of interactions between science and religion. The text is supplemented by an excellent bibliographic essay and an index. " Kenneth J. Howell, Journal of Modern History

GOR002670860
Science and Religion: Some Historical Perspectives by John Hedley Brooke
John Hedley Brooke
Cambridge Studies in the History of Science
Used - Very Good
Paperback
Cambridge University Press
1991-05-31
436
0521283744
9780521283748
N/A
Book picture is for illustrative purposes only, actual binding, cover or edition may vary.
This is a used book - there is no escaping the fact it has been read by someone else and it will show signs of wear and previous use. Overall we expect it to be in very good condition, but if you are not entirely satisfied please get in touch with us.