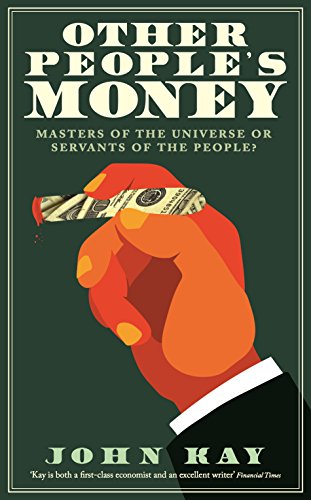 Other People's Money
by John Kay

Other People's Money: Masters of the Universe or Servants of the People? by John Kay

We all depend on the finance sector. We need it to store our money, manage our payments, finance housing stock, restore infrastructure, fund retirement and support new business. But these roles comprise only a tiny sliver of the sector's activity: the vast majority of lending is within the finance sector. So what is it all for? What is the purpose of this activity? And why is it so profitable? Industry insider John Kay argues that the finance world's perceived profitability is not the creation of new wealth, but the sector's appropriation of wealth - of other people's money. The financial sector, he shows, has grown too large, detached itself from ordinary business and everyday life, and has become an industry that mostly trades with itself, talks to itself, and judges itself by reference to standards which it has itself generated. And the outside world has itself adopted those standards, bailing out financial institutions that have failed all of us through greed and mismanagement. We need finance, but today we have far too much of a good thing. In Other People's Money, John Kay shows, in his inimitable style, what has gone wrong in the dark heart of the finance sector.

Should be read by everyone concerned with preventing the next crisis.... he skewers the pretensions of the finance sector and questions whether its high rewards reflect its true economic contribution. Barely a page goes by without an acute observation or pithy aphorism. * The Economist *
Kay is both a first-class economist and an excellent writer * Financial Times *
Quite brilliant [...] about as good a demonstration of Kay's skills (as economist, thinker and writer) as you are likely to find. -- Andrew Haldane * Prospect magazine *
John Kay is one of the most engaging and accessible writers on economics in Britain today * Morning Star *
An admirable debunker of myths and false beliefs - Kay can see substantial things others don't. -- Nassim N Taleb, author of * The Black Swan *
Mr Kay is a brilliant writer. -- Burton G Malkiel * Wall Street Journal *
An unparalleled communicator of economics to a non-specialist audience... a scintillating contribution to the debate not just on the future of finance but how we should run our economy. -- Felix Martin * The New Statesman *

John Kay is a visiting professor at the London School of Economics, and a Fellow of St John's College, Oxford. He is a director of several public companies and contributes a weekly column to the Financial Times. He chaired the UK government review of Equity Markets which reported in 2012 recommending substantial reforms. He is the author of many books, including The Truth about Markets (2003) and The Long and the Short of It (2009) and Obliquity (2010), published by Profile Books.

GOR006906948
Other People's Money: Masters of the Universe or Servants of the People? by John Kay
John Kay
Used - Very Good
Hardback
Profile Books Ltd
2015-09-03
368
1781254435
9781781254431
Short-listed for Orwell Prize 2016
Book picture is for illustrative purposes only, actual binding, cover or edition may vary.
This is a used book - there is no escaping the fact it has been read by someone else and it will show signs of wear and previous use. Overall we expect it to be in very good condition, but if you are not entirely satisfied please get in touch with us.