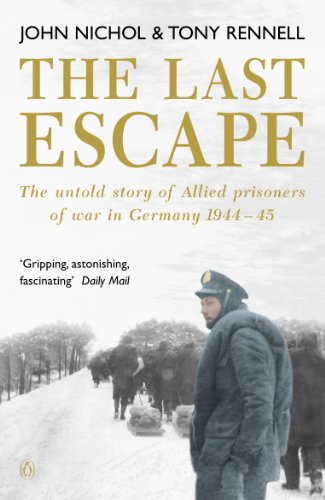 The Last Escape
by John Nichol

In Stock
$16.49
inc. GST
As WW2 drew to a close, thousands of British and American prisoners of war, held in camps in Nazi-occupied Europe, faced prospect that they would never get home alive. In depths of winter, their guards harried them on marches out of their camps and away from armies advancing into heart of Hitler's defeated Germany. This title tells their story.
Very Good
13 in stock

The Last Escape: The Untold Story of Allied Prisoners of War in Germany 1944-1945 by John Nichol

The Last Escape by Tony Rennell and John Nichol is an extraordinary look at the final days of World War II.

As WW2 drew to a close, hundreds of thousands of British and American prisoners of war, held in camps in Nazi-occupied Europe, faced the prospect that they would never get home alive. In the depths of winter, their guards harried them on marches outof their camps and away from the armies advancing into the heart of Hitler's defeated Germany. Hundreds died from exhaustion, disease and starvation. THE LAST ESCAPE is told through the testimony of those heroic men, now in their seventies and eighties and telling their stories publicly for the first time.

'Gripping, moving and thoughtful. The excellent team of Nichol and Rennell have done it again' Patrick Bishop, author of Fighter Boys

John Nichol is a former RAF flight lieutenant whose Tornado bomber was shot down on a mission over Iraq during the first Gulf War. He was captured and made a prisoner of war. Tony Rennell is a writer for the Daily Mail and a former deputy editor of the Sunday Times. Their previous books include The Last Escape, Tail-End Charlies and Medic.

John Nichol is a former RAF flight lieutenant whose Tornado fighter was shot down on a mission over Iraq during the Gulf War. He was captured and became a prisoner of war. He is the bestselling author of TORNADO DOWN and five other novels. He livesin Hertfordshire.

Tony Rennell is the author of LAST DAYS OF GLORY for Viking, and WHEN DADDY CAME HOME. He lives in London NW3.

The Russians are coming; abandoned to their fate; out into the cold; fears of a massacre; the retreat from Stalag Luft IV; the deadly road to the west; the rivers of humanity; liberated by the Red Army; hostages of Stalin; waiting for Patton; the hell of a Fallingbostel; death by "friendly fire"; a German saviour?; heading for home; welcome back. Appendices: chronology of the end of the Second World War; the Yalta Agreement on prisoners of war, February 1945; the Senior American Officer's complaint about conditions at Stalag XIIID, Nuremberg; the numbers game.

GOR000615215
The Last Escape: The Untold Story of Allied Prisoners of War in Germany 1944-1945 by John Nichol
John Nichol
Used - Very Good
Paperback
Penguin Books Ltd
2003-09-04
512
014100388X
9780141003887
N/A
Book picture is for illustrative purposes only, actual binding, cover or edition may vary.
This is a used book - there is no escaping the fact it has been read by someone else and it will show signs of wear and previous use. Overall we expect it to be in very good condition, but if you are not entirely satisfied please get in touch with us.