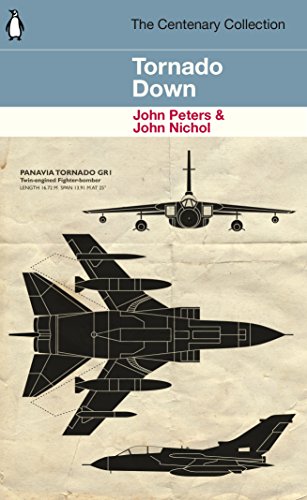 Tornado Down by John Nichol

Tornado Down: The Centenary Collection by John Nichol

In 1918, the RAF was established as the world's first independent air force. To mark the 100th anniversary of its creation, Penguin are publishing the Centenary Collection, a series of six classic books highlighting the skill, heroism esprit de corps that have characterised the Royal Air Force throughout its first century.

RAF Flight Lieutenants John Peters and John Nichol were shot down over enemy territory on their first mission of the Gulf War. Their capture in the desert, half a mile from their blazing Tornado bomber, began a nightmare seven-week ordeal of torture and interrogation which brought both men close to death.

In Tornado Down, John Peters and John Nichol tell the incredible story of their part in the war against Saddam Hussien's regime. It is a brave and shocking and totally honest story: a story about war and its effects on the hearts and minds of men.

Pilot John Peters and Navigator John Nichol were shot down over Iraq at the start of the Gulf war in January 1991. The two RAF flight lieutenants were held prisoner for 47 days and their battered faces flashed across the world's television screens.
GOR009160315
9781405937573
1405937572
Tornado Down: The Centenary Collection by John Nichol
John Nichol
The Centenary Collection
Used - Very Good
Paperback
Penguin Books Ltd
2018-05-17
320
N/A
Book picture is for illustrative purposes only, actual binding, cover or edition may vary.
This is a used book - there is no escaping the fact it has been read by someone else and it will show signs of wear and previous use. Overall we expect it to be in very good condition, but if you are not entirely satisfied please get in touch with us
Trustpilot