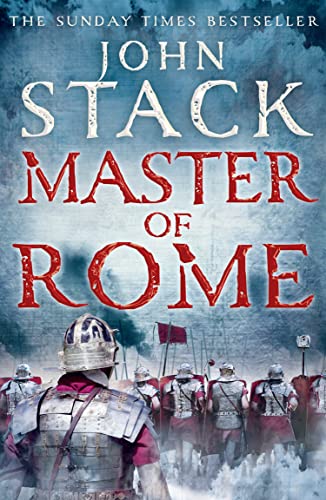 Master of Rome
by John Stack

A stirring adventure novel set amid the tumultuous clashes between the Roman and Carthaginian empires, battling for control of the Mediterranean, north Africa and Rome itself.

Master of Rome (Masters of the Sea) by John Stack

A stirring adventure novel set amid the tumultuous clashes between the Roman and Carthaginian empires, battling for control of the Mediterranean, north Africa and Rome itself.

Atticus, the young Greek captain, is now a commander of the growing Roman navy, blockading a port near Tunis, when the Roman legions suffer terrible defeat by the triumphant Carthaginian army, spearheaded by the elephant charges. He and his ships escape together with the main body of the Roman fleet out manoevred by the more skillful Carthaginians and then caught and almost completely annhilated by a terrible storm.

Atticus and his crew are among the handful of survivors and being the messenger of this news to the Senta in Rome brings Atticus into political troubles, almost as stormy as the sea. He begins to feel not onlt that a greek will never be accepted by the Romans but also that the behaviour of many, noth politicians and soldiers, is such that he is not sure that he wants to be a Roman.

Full of dramatic battles by land and sea, led by tremendous characters on both sides, MASTER OF ROME is a powerful novel, the third in this bestselling series by a born storyteller.

Praise for Ship of Rome

`Peopled with characters both fictional and historical, this debut novel - the first in the Masters Of The Sea series - gives a fascinating and evocative insight into the high politics and military life of the times'
Daily Mail

`This is a seriously entertaining book for anyone who enjoys stirring descriptions of ancient warfare. You can almost taste the salt, see the blood and hear the shouts and screams...John Stack is to be welcomed into the ranks of first-rate historical writers'
Tuam Herald

`Crank up the testosterone, this one's a fighter!'
U Magazine Ireland

John Stack was born and lives in County Cork. He has always wanted to write but has done a variety of jobs ending up in IT. He is married with three children.

GOR002823539
Master of Rome (Masters of the Sea) by John Stack
John Stack
Masters of the Sea
Used - Very Good
Paperback
HarperCollins Publishers
2011-01-01
384
000739375X
9780007393756
N/A
Book picture is for illustrative purposes only, actual binding, cover or edition may vary.
This is a used book - there is no escaping the fact it has been read by someone else and it will show signs of wear and previous use. Overall we expect it to be in very good condition, but if you are not entirely satisfied please get in touch with us.