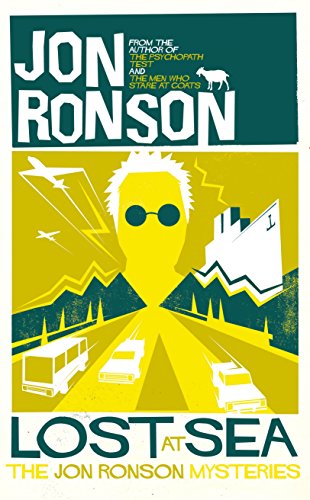 Lost at Sea by Jon Ronson

A collection of mini-adventure stories from the bestselling author of The Psychopath Test and The Men Who Stare at Goats.

Lost at Sea: The Jon Ronson Mysteries by Jon Ronson

Jon Ronson has been on patrol with America's real-life superheroes and to a UFO convention in the Nevada desert with Robbie Williams. He's interviewed a robot and asked her if she has a soul. He's travelled to the Alaskan theme town of North Pole (where every day is Christmas Day) to investigate a high school mass-murder plot. He's met a man who tried to split the atom in his kitchen and another who's preparing to welcome the aliens to earth.

Jon Ronson is fascinated by madness, strange behaviour and the human mind, and he has spent his life exploring mysterious events and meeting extraordinary people. Collected from various sources (including the Guardian and GQ) Lost at Sea features the very best of his adventures.

Frequently hilarious, sometimes disturbing, always entertaining, these compelling stories of the chaos that lies on the fringe of our daily lives will have you wondering just what we're capable of.

Portions of this book have appeared previously, in slightly different form, in Out of the Ordinary, What I Do, the Guardian and GQ (USA).

'Ronson is one of the finest comic writers working today' Will Self, Guardian 'Ronson is a tenacious, often courageous reporter, whose keen sense of humour never detracts from the integrity of his journalism' Sunday Times 'Simultaneously frightening and hilarious' The Times 'Funny and thought-provoking' Financial Times 'Compelling and eye-opening ... hugely compulsive reading' Psychologies 'Comic and entertaining, but with a serious effect as we catch glimpses of the odd things ticking away inside some real characters' Scotsman
Jon Ronson is an award-winning writer and documentary maker. He is the author of many bestselling books, including Frank: The True Story that Inspired the Movie, Lost at Sea: The Jon Ronson Mysteries, The Psychopath Test, The Men Who Stare at Goats and Them: Adventures with Extremists. His first fictional screenplay, Frank, co-written with Peter Straughan, starred Michael Fassbender. He lives in London and New York City.
GOR004417821
9781447222576
1447222571
Lost at Sea: The Jon Ronson Mysteries by Jon Ronson
Jon Ronson
Used - Very Good
Hardback
Pan Macmillan
2012-10-11
448
N/A
Book picture is for illustrative purposes only, actual binding, cover or edition may vary.
This is a used book - there is no escaping the fact it has been read by someone else and it will show signs of wear and previous use. Overall we expect it to be in very good condition, but if you are not entirely satisfied please get in touch with us
Trustpilot