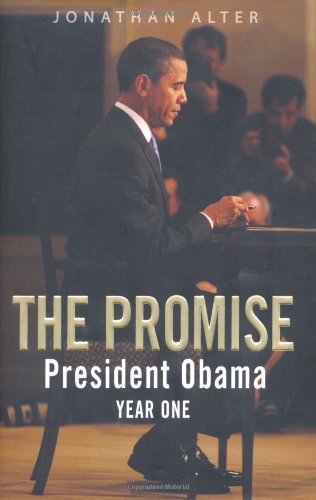 The Promise
by Jonathan Alter

Alter, a native of Chicago who has known Obama and his circle for nearly a decade, provides a fast-paced inside account of the breakneck speed with which President-elect Obama, and then President Obama, began making critical decisions and assuming the burdens of office amid the greatest economic crisis since the Great Depression.

With dozens of exclusive details about everything from the selection of Hillary Clinton as secretary of state to the president's secrets for running a good meeting, Alter paints a fresh and often surprising portrait of a highly disciplined and self-aware president and his colourful team. We see a young president of extraordinary temperament grappling with the task of stimulating the economy, bailing out large banks, taking over the American auto industry, making the crucial decision about sending more troops to Afghanistan, deciding whether to negotiate with Iran about its nuclear program, and fighting for a major reform of the country's health care system. Alter explains what Obama is like in private, how he operates, and why he is so insistent on leading the country and the world into a new era of wrenching change.

Jonathan Alter is an analyst and contributing correspondent for NBC News and MSNBC. He is a former senior editor and columnist for Newsweek, where he worked for twenty-eight years, writing more than fifty cover stories. He has also written for The New York Times, The Washington Post, The Atlantic, Vanity Fair, The New Republic, and other publications. He is the author of The Promise: President Obama, Year One and The Defining Moment: FDR's Hundred Days and the Triumph of Hope, both New York Times bestsellers, and Between the Lines, a collection of his Newsweek columns.

GOR003422083
The Promise: President Obama by Jonathan Alter
Jonathan Alter
Used - Very Good
Hardback
Simon & Schuster Ltd
2010-05-18
480
184737655X
9781847376558
N/A
Book picture is for illustrative purposes only, actual binding, cover or edition may vary.
This is a used book - there is no escaping the fact it has been read by someone else and it will show signs of wear and previous use. Overall we expect it to be in very good condition, but if you are not entirely satisfied please get in touch with us.