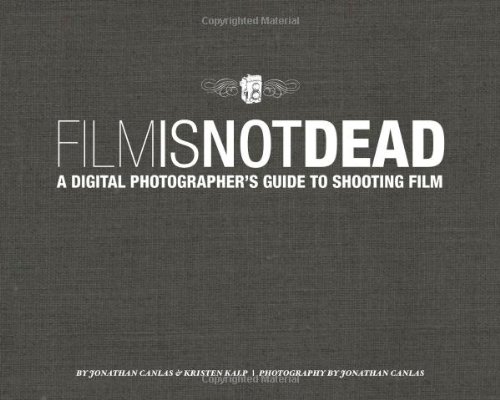 Film Is Not Dead by Jonathan Canlas

Film Is Not Dead: A Digital Photographer's Guide to Shooting Film by Jonathan Canlas

With the popularity of digital photography growing by leaps and bounds over the last decade, some say film has been dying a slow death ever since-or is already dead. The reality is that film has never gone away, and in recent years has experienced a surging, renewed popularity-sometimes simply for its retro, analog status, but mostly for film's ability to create a look and feel that many believe digital can still not achieve. If anyone can attest to this, it's Utah photographer Jonathan Canlas, who exclusively shoots with film, and has both an extremely successful wedding photography business as well as a series of popular workshops held numerous times per year around the world.

In Film Is Not Dead: A Digital Photographer's Guide to Shooting Film, Canlas teams up with co-author Kristen Kalp to open the doors for anyone who wants to begin-or return to-shooting film. Casual, irreverent, fun, inspiring, and beautiful, this unique 10x8 hardcover book teaches the reader the basics of film, cameras, and shooting in this medium. Whether it's discussing the different tone and color characteristics of different films (Kodak, Fuji, etc.), how to load a medium-format camera back, how to create proper exposures, how and where to get film processed, or how Jonathan uses fun, plastic cameras like the Holga in his commercial and personal work, Film Is Not Dead appeals to anyone who is searching to finally begin creating that film look, but until now hasn't known where to start.
Jonathan Canlas is a popular and in-demand wedding and commercial/magazine photographer who shoots exclusively with film. He has a degree in photography from Brigham Young University and lives with his family in Utah. Jonathan is a go-to voice in this growing, niche part of the industry, and he teaches Film Is Not Dead (FIND) workshops around the world. jonathancanlasphotography.com

Kristen Kalp is a writer and orphan hugger who pens the Brand Camp blog to help you create a more meaningful (biz) life. http://www.brandcampblog.com.
THE REASONS
THE RULES
THE CAMERAS
THE FILM
THE EXPOSING
THE BACKEND
THE PERSONAL PROJECTS
THE TUTORIALS
THE RESOURCES
GOR008232800
9780321812803
0321812808
Film Is Not Dead: A Digital Photographer's Guide to Shooting Film by Jonathan Canlas
Jonathan Canlas
Used - Very Good
Hardback
Pearson Education (US)
2012-02-09
288
N/A
Book picture is for illustrative purposes only, actual binding, cover or edition may vary.
This is a used book - there is no escaping the fact it has been read by someone else and it will show signs of wear and previous use. Overall we expect it to be in very good condition, but if you are not entirely satisfied please get in touch with us
Trustpilot