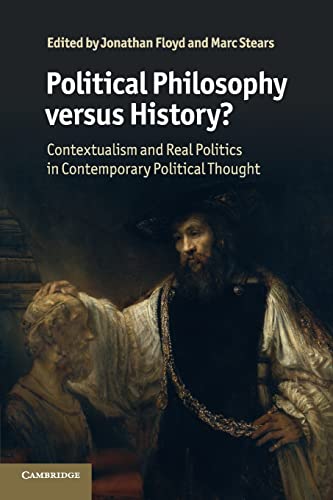 'This volume is a welcome addition to the literature on the methodologies of the history of political thought and political philosophy. All the essays are of top quality and are written by contributors with an international reputation in the field. Variety in content and argument gives a sense of genuine debate and suggests new perspectives on the central issues under discussion.' Jeremy Jennings, Professor of Political Theory, Queen Mary, University of London
'For almost half a century, philosophers and historians have disputed the ownership of political thought. Like many territorial battles, this one has been fought on uncertain terrain, with poorly marked boundaries. Political Philosophy versus History? brings a very welcome clarity to the issues at stake. If it does not settle all the issues, it enables the reader to identify them much more clearly than hitherto. The essays are marked by deep learning, lucidity, meticulousness, and a welcome concern to do justice to all sides of an often contentious debate.' Alan Ryan, Professor Emeritus of Political Theory, University of Oxford
'The contributors to Floyd and Stears' Political Philosophy versus History? engage in a series of spirited inquiries into the relationship between political philosophy and history. In so doing they mount challenges to 'contextualism' and assess the possibilities and prospects for a distinctly 'realist' mode of theorizing that is at once historically situated and normatively grounded. The essays collected here challenge, and will likely change, the terms of contemporary debates about the character and condition of political theory in our time.' Terence Ball, Professor, School of Politics and Global Studies, Arizona State University

Jonathan Floyd is a British Academy Post-Doctoral Fellow in the Department of Politics and International Relations, University of Oxford, and Research Fellow in Political Theory at St Hilda's College. He was previously a Fellow of the Centre for Political Ideologies and a Research Scholar at University College, University of Oxford. He has written widely on both the nature of political philosophy and on its relationship with history. Marc Stears is Fellow in Politics at University College, Oxford, having previously been Fellow in Social and Political Sciences at Emmanuel College, Cambridge. He is the author of Demanding Democracy: American Radicals in Search of a New Politics (2010) and Progressives, Pluralists and the Problems of the State (2002), as well as joint editor of Political Theory: Methods and Approaches (2008). He is well-known for his research on methodology in the history of political thought and for innovative approaches to the study of political ideologies.

GOR010827476
Political Philosophy versus History?: Contextualism and Real Politics in Contemporary Political Thought by Jonathan Floyd (Dr, University of Oxford)
Jonathan Floyd (Dr, University of Oxford)
Used - Very Good
Paperback
Cambridge University Press
2011-08-04
240
0521146887
9780521146883
N/A
Book picture is for illustrative purposes only, actual binding, cover or edition may vary.
This is a used book - there is no escaping the fact it has been read by someone else and it will show signs of wear and previous use. Overall we expect it to be in very good condition, but if you are not entirely satisfied please get in touch with us.