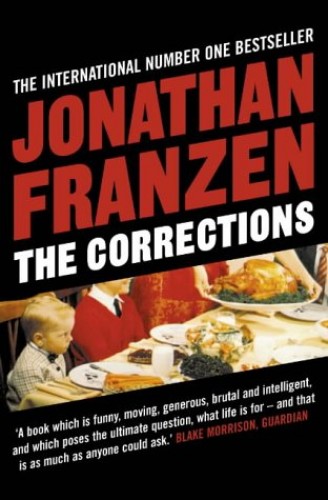 The Corrections by Jonathan Franzen

The winner of THE NATIONAL BOOK AWARD, the New York Times No.1 Bestseller and the worldwide literary sensation, The Corrections has established itself as a truly great American novel.

The Corrections by Jonathan Franzen

The winner of THE NATIONAL BOOK AWARD, the New York Times No.1 Bestseller and the worldwide literary sensation, The Corrections has established itself as a truly great American novel.

The Lamberts - Enid and Alfred and their three grown-up children - are a troubled family living in a troubled age. Alfred is ill and as his condition worsens the whole family must face the failures, secrets and long-buried hurts that haunt them if they are to make the corrections that each desperately needs. Stretching from the Midwest in the mid-century to Wall Street and Eastern Europe in the age of globalised greed, The Corrections brings an old-time America of freight trains and civic duty into wild collision with the era of home surveillance, hands-off parenting, do-it-yourself mental healthcare, and New Economy millionaires. It announces Jonathan Franzen as one of the most brilliant interpreters of American society and the American soul.

'A book which is funny, moving, generous, brutal and intelligent, and which poses the ultimate question, what life is for - and that is as much as anyone could ask.' Blake Morrison, GUARDIAN

'For anyone who has ever found themselves guiltily yearning for an Anne Tyler while in the middle of an Updike or Wolfe. The Lamberts are utterly believable, and once they have all told their stories you can't help but sympathise with them. Be prepared to be moved.' Laurence Phelan, INDEPENDENT ON SUNDAY

'Compelling. A pleasure from beginning to end. Franzen, in one leap, has put himself into the league of Updike & Roth. That's why there is so much excitement about it.' David Sexton, EVENING STANDARD

'A novel of outstanding sympathy, wit, moral intelligence and pathos, a family saga told with stylistic brio and psychological and political insight. No British novelist is currently writing at this pitch.' Jeremy Treglowen, FINANCIAL TIMES

'Impossible to dislike, an unpretentious page-turner.' Zadie Smith, GUARDIAN Books of the Year

Jonathan Franzen was born in 1959 and graduated from Swarthmore College. He has lived in Boston, Spain, New York, Colorado Springs and Philadelphia. His previous novels are The Twenty-Seventh City (1988) and Strong Motion (1992). How to be Alone, a collection of Franzen's non fiction will be published in October 2002.

GOR010556327
The Corrections by Jonathan Franzen
Jonathan Franzen
Used - Like New
Paperback
HarperCollins Publishers
2002-09-02
672
1841156736
9781841156736
Winner of James Tait Black Memorial Prize (Fiction) 2002 Short-listed for International IMPAC Dublin Literary Award 2003
Book picture is for illustrative purposes only, actual binding, cover or edition may vary.
The book has been read, but looks new. The book cover has no visible wear, and the dust jacket is included if applicable. No missing or damaged pages, no tears, possible very minimal creasing, no underlining or highlighting of text, and no writing in the margins.
Trustpilot