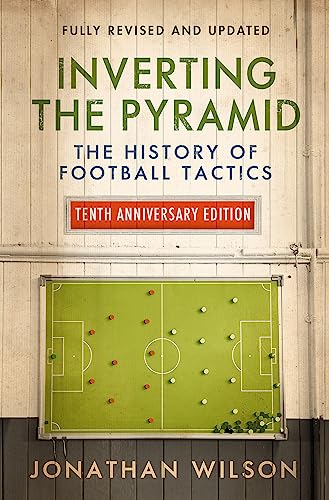 Inverting the Pyramid
by Jonathan Wilson

Jonathan Wilson's modern classic on football tactics, now fully updated for its tenth-anniversary edition
'Masterful ... it could be the best thing to have happened to English football in years' TIME OUT

Inverting the Pyramid: The History of Football Tactics by Jonathan Wilson

'Masterful ... it could be the best thing to have happened to English football in years' TIME OUT


In Inverting the Pyramid, Jonathan Wilson pulls apart the finer details of the world's game, tracing the global history of tactics, from modern pioneers right back to the beginning when chaos reigned. Along the way, he looks at the lives of great players and thinkers who shaped the sport and probes why the English, in particular, have 'proved themselves unwilling to grapple with the abstract'.

This tenth-anniversary edition of a footballing modern classic has been fully updated to include the development of gegenpressing as pioneered by German coaches such as Ralf Rangnick and Jurgen Klopp, and its subsequent influence on the world game. It also analyses the tactical evolution of Pep Guardiola, the increasing alternatives to possession-based football and the changing role of the goalkeeper, as well as investigating the trend of full-backs developing into midfielders and the consequent return of three at the back.

A masterful work, It's all deliciously nerdy - a cross between a coaching manual and a social history - and if its publication helps foster a flowering of interest in the tactical and analytical side of the game in this country, it could be the best thing to have happened to English football in years.**** * TIME OUT - book of the week *
Facts and stats, plus anecdotes, interviews and Wilson's deft touch with football-speak, give colour to a subject that can be a little dry and all-too confusing for those watching (and often those picking the side). * CQ *
For a detailed analysis of how a single striker became the norm throughout football, you had better read Jonathan Wilson's excellent new book about tactics. -- Patrick Barclay * SUNDAY TELEGRAPH *
[A] fascinating history of tactics, a book that is guaranteed to enhance your football watching; your team may still lose, but you'll have a far better idea why they did. * INDEPENDENT ON SUNDAY *
This must surely go down as one of the most revelatory sports books of the year, as well as one of the best, who would have thought that a book charting the history of football tactics and strategy, from the 1870s to the present day, could be so engrossing and entertaining. * SCOTLAND ON SUNDAY *
Absorbing and informative * GUARDIAN ON LINE *
A gloriously readable, eccentric and informative trawl through the changing tactical mindsets and formations that have helped shape the beautiful game. * METRO *
You will never read a more entertaining or erudite history of tactics * SUNDAY TELEGRAPH-CHRISTMAS BOOKS *
This is a masterful piece of research and lives up to the claim to be nothing less than "a history of football tactics"... Facinating * SCOTSMAN -Books of the Year *
a fascinating analysis of the way the game has evolved tactically from the 1970s until the last season... as a summary of the first 140 years of football tactical history, it is hard to imagine a more readable or thorough effort. * IRISH EXAMINER *

Jonathan Wilson's Inverting the Pyramid won the National Sporting Club Book of the Year award, and was shortlisted for the William Hill Sports Book of the Year award. His other books include Behind the Curtain: Travels in Eastern European Football; Sunderland: A Club Transformed; The Anatomy of England: A History in Ten Matches; Nobody Ever Says Thank You, a critically acclaimed biography of Brian Clough; The Outsider: A History of the Goalkeeper; The Anatomy of Liverpool; Angels with Dirty Faces: The Footballing History of Argentina; and The Anatomy of Manchester United. He writes for the Guardian, Sports Illustrated and World Soccer, and he is the editor of The Blizzard.

GOR009705201
Inverting the Pyramid: The History of Football Tactics by Jonathan Wilson
Jonathan Wilson
Used - Very Good
Paperback
Orion Publishing Co
2018-06-14
512
1474609295
9781474609296
N/A
Book picture is for illustrative purposes only, actual binding, cover or edition may vary.
This is a used book - there is no escaping the fact it has been read by someone else and it will show signs of wear and previous use. Overall we expect it to be in very good condition, but if you are not entirely satisfied please get in touch with us.