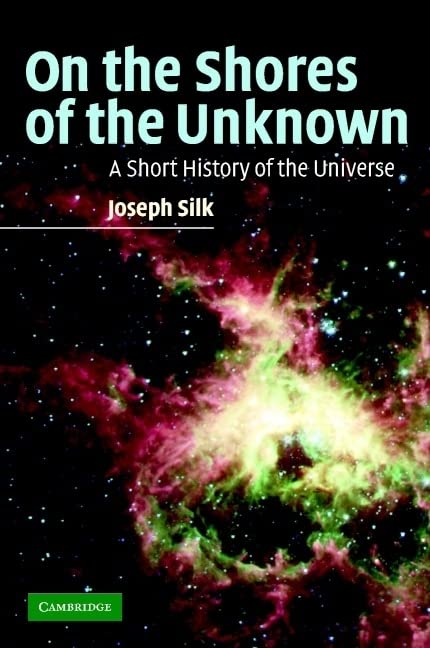 In Stock
$24.99
inc. GST
In this fascinating book, astronomer Joseph Silk explores the Universe from its beginnings to its ultimate fate. Stars, galaxies, dark matter and dark energy are described, as successive chapters detail the evolution of the Universe from a fraction of a microsecond after the Big Bang.
Very Good
Only 2 left

On the Shores of the Unknown Summary

On the Shores of the Unknown: A Short History of the Universe by Joseph Silk (University of Oxford)

In this fascinating book, astronomer Joseph Silk explores the Universe from its beginnings to its ultimate fate. He shows how cosmologists study cosmic fossils and relics from the distant past to construct theories of the birth, evolution and future of the Universe. Stars, galaxies, dark matter and dark energy are described, as successive chapters detail the evolution of the Universe from a fraction of a microsecond after the Big Bang. Silk describes how physicists apply theories of subatomic particles to recreate the first moments of the Big Bang, and how astronomers chart the vast depths of space to glimpse how the most distant galaxies formed. He describes the search for dark matter and the dark energy that will determine the ultimate fate of the Universe. This highly readable account will appeal to all those with an interest in the story of the Universe.

On the Shores of the Unknown Reviews

'To give an account of the history of the universe in a book fewer than 250 pages long is no easy task, but Joseph Silk has approached it with skill and obvious enthusiasm.' Patrick Moore, The Times Higher Education Supplement
'... a lively appreciation of the wonder and weirdness that the universe contains ... a comprehensive masterly performance enhanced by stunning photographs.' New Scientist
'... masterfully summarises what we currently know and what we currently do not know about the Universe.' Marcus Chown, BBC Sky at Night Magazine
'This book, as its secondary title suggests, describes the origin and development of the Universe, and does so with clarity and in sufficient detail to satisfy the needs of a serious student of cosmology and to provide the professional astronomer with a valuable resume of current beliefs. It is also enjoyable to read in terms of its size and presentation, which is a benefit for all readers but particularly helpful for the layman, who, to get the most out of it, will need to read it several times. ... clear and concise ...' The Observatory
'This is ... a concise and authoritative tour of cosmological thought stripped of unnecessary complexity. ... in these 240 pages you will find a pared-down story that covers the essentials ... written by one of the greats of the field, Joseph silk, and it shows. The great pleasure of this book is that it does not read like an abridged version: it is written with precision, confidence and a sure eye for the essentials. ... it's a page-turner - a really compelling read. One reason for this is the confidence of Silk's style. ... The other reason is that the history of the universe is so fascinating - and this is a book that illuminates both that story and the way that scientists have unravelled it so far.' Astronomy & Geophysics
"Silk is an expert in the field and describes both the triumphs and the controversies of modern astrophysical research with clarity and eloquence. Strongly recommended." Choice
"Cosmologist Joseph Silk sums up the evidence and shows how physicists are able to leap from the infinitesimal to the vast in A Short History of the Universe." Chicago Tribune
"...a worthy preface to the momentous discoveries undoubtedly coming in the next decade." Astronomy
"Of the many books currently available on cosmology, this is the one I would choose to hook the neophyte or delight the aficionado." Boston Book Review
"A useful introduction." Choice

About Joseph Silk (University of Oxford)

Joseph Silk is Savilian Professor of Astronomy in the Department of Physics, University of Oxford.

Prologue; 1. Building blocks of the cosmos; 2. The expansion of the universe; 3. Cosmic microwave background; 4. The first 10-43 seconds of the Universe; 5. Genesis of baryons and helium; 6. Testing the Big Bang; 7. Dark matter; 8. Baryonic dark matter; 9. Intergalactic matter; 10. Origin of structure; 11. Large-scale structure; 12. Galaxy formation; 13. What lies ahead.

GOR001042045
On the Shores of the Unknown: A Short History of the Universe by Joseph Silk (University of Oxford)
Joseph Silk (University of Oxford)
Used - Very Good
Hardback
Cambridge University Press
2005-01-03
254
0521836271
9780521836272
N/A
Book picture is for illustrative purposes only, actual binding, cover or edition may vary.
This is a used book - there is no escaping the fact it has been read by someone else and it will show signs of wear and previous use. Overall we expect it to be in very good condition, but if you are not entirely satisfied please get in touch with us.