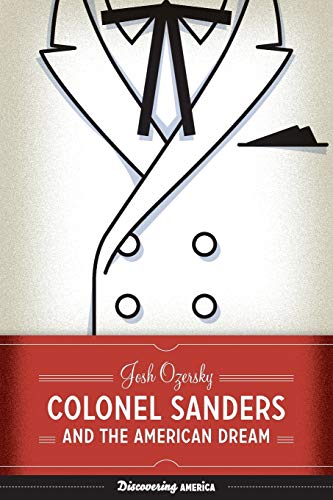 Colonel Sanders and the American Dream by Josh Ozersky

Colonel Sanders and the American Dream by Josh Ozersky

From Aunt Jemima and Uncle Ben to the Jolly Green Giant and Ronald McDonald, corporate icons sell billions of dollars' worth of products. But only one of them was ever a real person-Colonel Sanders of Kentucky Fried Chicken/KFC. From a 1930s roadside cafe in Corbin, Kentucky, Harland Sanders launched a fried chicken business that now circles the globe, serving finger lickin' good chicken to more than twelve million people every day. But to get there, he had to give up control of his company and even his own image, becoming a mere symbol to people today who don't know that Colonel Sanders was a very real human being. This book tells his story-the story of a dirt-poor striver with unlimited ambition who personified the American Dream.

Acclaimed cultural historian Josh Ozersky defines the American Dream as being able to transcend your roots and create yourself as you see fit. Harland Sanders did exactly that. Forced at age ten to go to work to help support his widowed mother and sisters, he failed at job after job until he went into business for himself as a gas station/cafe/motel owner and finally achieved a comfortable, middle-class life. But then the interstate bypassed his business and, at sixty-five, Sanders went broke again. Packing his car with a pressure cooker and his secret blend of eleven herbs and spices, he began peddling the recipe for Colonel Sanders' Kentucky Fried Chicken to small-town diners in exchange for a nickel for each chicken they sold. Ozersky traces the rise of Kentucky Fried Chicken from this unlikely beginning, telling the dramatic story of Sanders' self-transformation into The Colonel, his truculent relationship with KFC management as their often-disregarded goodwill ambassador, and his equally turbulent afterlife as the world's most recognizable commercial icon.

Josh Ozersky (1967-2015) was a James Beard Award-winning food writer and cultural historian, the author of The Hamburger: A History. He writes on society and food for Time magazine and has written frequently for New York Magazine, the New York Times, Saveur, and numerous other publications. Among his other books are Archie Bunker's America: TV in an Era of Change, 1968-1978 and Meat Me in Manhattan: A Carnivore's Guide to Manhattan.
GOR011669337
9781477314753
147731475X
Colonel Sanders and the American Dream by Josh Ozersky
Josh Ozersky
Discovering America
Used - Like New
Paperback
University of Texas Press
20170401
156
N/A
Book picture is for illustrative purposes only, actual binding, cover or edition may vary.
The book has been read, but looks new. The book cover has no visible wear, and the dust jacket is included if applicable. No missing or damaged pages, no tears, possible very minimal creasing, no underlining or highlighting of text, and no writing in the margins
Trustpilot