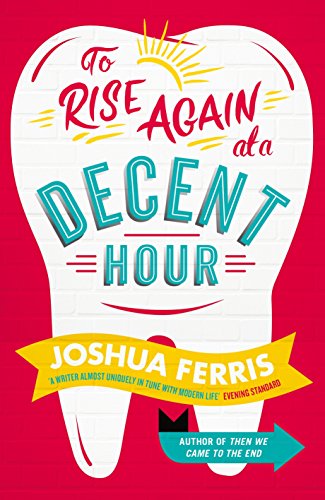 To Rise Again at a Decent Hour
by Joshua Ferris

In Stock
$17.19
inc. GST
Paul O'Rourke - dentist extraordinaire, reluctant New Yorker, avowed atheist, disaffected Red Sox fan, and a connoisseur of the afternoon mochaccino - is a man out of touch with modern life.
Like New
Only 1 left

To Rise Again at a Decent Hour Summary

To Rise Again at a Decent Hour by Joshua Ferris

*** Shortlisted for the Man Booker Prize 2014 *** 'The Catch-22 of dentistry' Stephen King Joshua Ferris's dazzling new novel To Rise Again at a Decent Hour is about the meaning of life, the certainty of death, and the importance of good oral hygiene. There's nothing like a dental chair to remind a man that he's alone in the world . . . Paul O'Rourke - dentist extraordinaire, reluctant New Yorker, avowed atheist, disaffected Red Sox fan, and a connoisseur of the afternoon mochaccino - is a man out of touch with modern life. While his dental practice occupies his days, his nights are filled with darker thoughts, as he alternately marvels at and rails against the optimism of the rest of humanity. So it goes, until someone begins to impersonate Paul online. What began as an outrageous violation of privacy soon becomes something far more soul-frightening: the possibility that the virtual 'Paul' might be a better version of the man in the flesh . . . 'Frenetic, very funny, it confirms Ferris as a rising star of American fiction' Mail on Sunday 'Glorious . . . A very, very funny novel' BBC Radio 4 Saturday Review 'Dismayingly funny in the way that only really serious books can be' Guardian Joshua Ferris was born in Illinois in 1974. He is the author of Then We Came to the End (2007), which was nominated for the National Book Award and longlisted for the Guardian First Book Award, and The Unnamed. In 2010 he was selected for the New Yorker's prestigious '20 under 40' list. In 2014 To Rise Again At A Decent Hour was shortlisted for both the Man Booker Prize and the Dylan Thomas Prize. He lives in upstate New York.

To Rise Again at a Decent Hour Reviews

Funny, thought-provoking, and touching. One hesitates to call it the CATCH-22 of dentistry, but it's sort of in that ballpark. Some books simply carry you along on the strength and energy of the author's invention and unique view of the world. This is one of those books -- Stephen King
Smart, sad, hilarious and eloquent . . . a writer at the top of his game and surpassing the promise of his celebrated debut * Kirkus *
This is one of the funniest, saddest, sweetest novels I've read since Then We Came to the End. When historians try to understand our strange, contradictory era, they would be wise to consult To Rise Again at a Decent Hour. It captures what it is to be alive in early 21st-century America like nothing else I've read * Anthony Marra *
Very funny [and] highly entertaining . . . Josh Ferris is a gifted satirist and very much in touch with the fear and paranoia that undercut US society * Irish Times *
Joshua Ferris has proved his astonishing ability to spin gold from ordinary air . . . As brave and adept as any writer out there * New York Times Book Review *
Geek-smart prose and wry humour . . . hilarious -- Economist
Genuine, funny, tragic and never dull. It'll also leave you flossing with a vengeance -- GQ
It's a pleasure watching this young writer confidently range from the registers of broad punchline comedy to genuine spiritual depth . . . There's a happy side effect to reading the novel, as well: If you're a backslider like I was, it will guilt you into flossing again * Wall Street Journal *
An engrossing and hilariously bleak novel about a dentist being shook out of his comfortable atheism . . . This splintering of the self hasn't been performed in fiction so neatly since Philip Roth's "Operation Shylock' * Boston Globe *
Ferris [is] a Virgil of the disaffected . . . This is the novel's peculiar brilliance, to uncover its existential stakes in the most mundane tasks * LA Times *
Laugh-out-loud hilarious, combining Woody Allen's New York nihilism with an Ivy League vocabulary * Booklist *
Returns Ferris to the comedy of the workplace . . . his writing is so fresh and modern - a comedian's sense of timing mixed with a social critic's knack for shaking the bushes * Interview Magazine *
Funny and surprisingly moving * Glamour *
It is completely wonderful . . . Good god he is talented -- Sarah Jessica Parker
Enormously impressive: profoundly and humanely engaged with the mysteries of belief and disbelief . . . dismayingly funny in the way that only really serious books can be * Guardian *
Brilliant . . . witty . . . passages of flashing comedy that sound like a stand-up theologian suffering a nervous breakdown * Washington Post *
Joshua Ferris excels at mordantly comic novels about ordinary people in crisis . . . he writes with brio about the modern condition * Metro *
Compelling but never cheap, inventive but never obscure . . . Ferris has secured his status as exactly the sort of mainstream literary novelist American fiction needs * Independent on Sunday *
A hoot . . . There's a tincture of Pynchonian paranoia a la The Crying of Lot 49 here, and a dash, too, of the kitchen-sink comic winsomeness that the Dave Eggers generation brought to US literary fiction * FT *
Glorious . . . A very, very funny novel. If misanthropy's going to come from anywhere it's from a lifetime's confrontation with halitosis * BBC Radio 4 Saturday Review *
This is fierce, pithy, unforgiving satire, taking a sledgehammer to all-American cracker-barrel homeliness. Its comic energy is fuelled by disgust and exasperation, in the tradition of Roth and Heller and John Kennedy O'Toole. But Ferris is also a dab hand at more delicate humour, every bit as contemporary . . . Ferris is very funny . . . His voice is unique -- Craig Brown * Mail on Sunday *
Joshua Ferris has been heralded as one of America's sharpest observers of 21st-century life and, reading his third novel, it's easy to see why. To Rise Again At A Decent Hour has the immediacy and the trenchant satire of a brilliant stand-up routine as well as the big ideas and the in-depth research of a brilliant academic paper * Express *
To Rise Again at a Decent Hour is a funny novel, by turns ha-ha, peculiar and, like O'Rourke himself, suspended between heaven and earth * Independent *

Joshua Ferris was born in Illinois in 1974. He is the author of Then We Came to the End (2007), which was nominated for the National Book Award and longlisted for the Guardian First Book Award, and the highly acclaimed The Unnamed. In 2010 he was selected for the New Yorker's prestigious '20 under 40' list. In 2014 To Rise Again at a Decent Hour won the Dylan Thomas Prize and was shortlisted for the Man Booker Prize. He lives in upstate New York.

GOR010516751
To Rise Again at a Decent Hour by Joshua Ferris
Joshua Ferris
Used - Like New
Paperback
Penguin Books Ltd
2014-05-13
352
0241003830
9780241003831
Winner of Dylan Thomas Prize 2014 Short-listed for Man Booker Prize for Fiction 2014
Book picture is for illustrative purposes only, actual binding, cover or edition may vary.
The book has been read but remains in clean condition. All pages are intact and the cover is intact. Some minor wear to the spine.