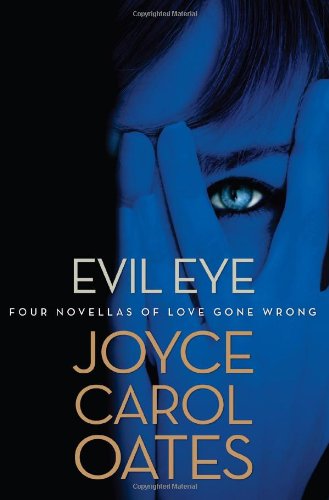 Joyce Carol Oates is one of the most prominent writers of her generation, and she is fearless when exploring the most disturbing corners of human nature. In Evil Eye, Oates offers four chilling tales of love gone horribly wrong, showing the lengths people will go to find love, keep it, and sometimes end it.

In "Evil Eye," we meet Mariana, the young 4th wife of a prominent intellectual. When her husband's brazen first wife visits one night, Mariana learns a terrible secret that threatens her marriage and sanity. In "So Near, Anytime, Always," shy teenager Lizbeth meets Desmond, a charming boy who offers this introverted girl the first sparks of young romance. Yet just as their relationship begins to blossom, Lizbeth realizes that beneath Desmond's perfect fa ade lies a dark soul that could wreak havoc on Lizbeth and her loved ones. In "The Execution," spoiled college student Bart Hansen has planned the perfect, brutal crime to get back at his parents for their years of condescension. Yet what he didn't plan for is a mother whose love is more resilent than he could have ever imagined, who threatens to derail his carefully laid-out plans.

"A dazzling, disturbing, tour de force of Gothic suspense: four odd, compelling, ingeniously narrated tales that gain in power and resonance when read in conjunction with each other."--Boston Globe

"These potboilers about murder, obsession and death have a genre funkiness, a greasy pulp seaminess, that is reminiscent of forgotten subscription serials and old "Twilight Zone" installments. . . . For Oates, whose worldview is as flinty as that of any of her male peers, true horror is rooted not in the supernatural--that would be almost reassuring--but in the things that men and women do to each other under the spell of attraction."--Washington Post

"These four Gothic tales run the gamut from creepy to mesmerizing. . . . All the while, [Oates] slyly critiques our culture, from parents who don't protect their young daughters from sexual predators to killers hopped up on prescription meds."--Cleveland Plain Dealer

"Exquisitely suspenseful. . . . The relationships between the damaged, sometimes monstrous individuals who people these pages will keep the reader riveted."--Publishers Weekly (starred review)

"Love doesn't just go wrong between Oates' characters, it blows up, drips poison, tortures, kills. . . . This is among her better quick-turn efforts. Each of its novellas makes your skin crawl even as it also seems completely believable, like something you heard once, from where, you can't remember."--Star Tribune (Minneapolis)

"This is familiar Oates territory, mapped with artistry and care; dark, bloody, and unforgiving."--Barnes & Noble Review

"Immediately engaging . . . [the] suspense is palpable."--Shenandoah

"With her focus on deviant and twisted characters, Oates continues to be a worthy descendant of the gothic tradition of Edgar Allan Poe."--Kirkus Reviews

"A quartet of shrewd and unnerving novellas. . . . Oates has a superbly disconcerting gift for orchestrating slowly coalescing realizations that something is horribly wrong."--Booklist

"A proper definition for the word love is as slippery and ambiguous as the future of Oates' seemingly doomed characters. . . . Oates makes the reader feel as if an evil eye is trained upon them with the passing of each hour and the turning of each page."--Missourian (blog)

"A stunningly written, disturbing masterpiece. . . . The four worlds that Oates gives us here pull in the reader until she finds herself too fascinated to leave--even when everything gets creepy."--Bustle.com

Joyce Carol Oates is the author of such national best-sellers as "The Falls, Blonde, " and "We Were the Mulvaneys." She has been nominated for six National Book Awards, winning for "Them."
GOR006770468
9780802120472
0802120474
Evil Eye by Joyce Carol Oates
Joyce Carol Oates
Used - Very Good
Hardback
Grove Press / Atlantic Monthly Press
2012-12-20
216
N/A
Book picture is for illustrative purposes only, actual binding, cover or edition may vary.
This is a used book - there is no escaping the fact it has been read by someone else and it will show signs of wear and previous use. Overall we expect it to be in very good condition, but if you are not entirely satisfied please get in touch with us
Trustpilot