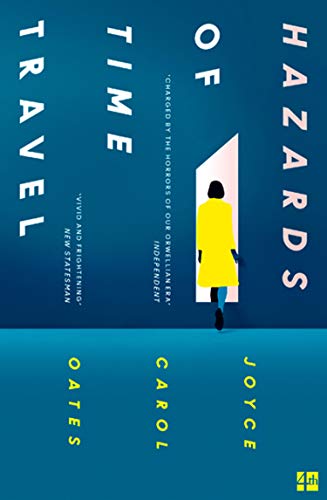 When a recklessly idealistic girl in a dystopian future society dares to test the perimeters of her tightly controlled world, she is punished by being sent back in time to a region of North America - 'Wainscotia, Wisconsin' - that existed eighty years before. Cast adrift in time in this idyllic Midwestern town, she is set upon a course of 'rehabilitation' - but she falls in love with a fellow exile and starts to question the constraints of her new existence, with results that are both devastating and liberating.

Arresting and visionary, Hazards of Time Travel is an exquisitely wrought love story, a novel of harrowing discovery - and an oblique but powerful response to our current political climate.

'A dystopian narrative in which the indomitable Oates seems to be flexing new muscles ... unrelentingly disturbing' Observer

'Joyce Carol Oates taps deep into contemporary anxieties over the rise of surveillance, totalitarian governments and invasive technology ... [she has an] unerring ability to reflect the times in which we live' Daily Mail

'Nothing is as it seems in this accelerating swirl of political and academic satire, science fiction and romantic melodrama. At 80, after more than 40 novels, Oates is still casting some awfully dark magic' Washington Post

Joyce Carol Oates is a recipient of the National Book Critics Circle Lifetime Achievement Award, the National Book Award and the PEN / Malamud Award, and has been nominated for the Pulitzer Prize. Her books include We Were the Mulvaneys, Blonde, Carthage, and, most recently, A Book of American Martyrs. She is Professor of Humanities at Princeton University.

GOR010205999
Hazards of Time Travel by Joyce Carol Oates
Joyce Carol Oates
Used - Very Good
Paperback
HarperCollins Publishers
2019-10-03
336
0008295484
9780008295486
N/A
Book picture is for illustrative purposes only, actual binding, cover or edition may vary.
This is a used book - there is no escaping the fact it has been read by someone else and it will show signs of wear and previous use. Overall we expect it to be in very good condition, but if you are not entirely satisfied please get in touch with us.