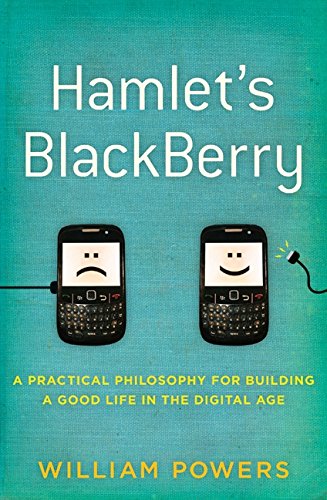 In Stock
$17.49
inc. GST
A crisp, passionately argued polemic that challenges the sacred dogma of the digital age--the more we connect through technology, the happier we are--and offers a new, practical philosophy for life in a world of screens.
Very Good
Only 1 left

"A brilliant and thoughtful handbook for the Internet age." --Bob Woodward

A crisp, passionately argued answer to the question that everyone who's grown dependent on digital devices is asking: Where's the rest of my life? Hamlet's BlackBerry challenges the widely held assumption that the more we connect through technology, the better. It's time to strike a new balance, William Powers argues, and discover why it's also important to disconnect. Part memoir, part intellectual journey, the book draws on the technological past and great thinkers such as Shakespeare and Thoreau. "Connectedness" has been considered from an organizational and economic standpoint--from Here Comes Everybody to Wikinomics--but Powers examines it on a deep interpersonal, psychological, and emotional level. Readers of Malcolm Gladwell's The Tipping Point and Outliers will relish Hamlet's BlackBerry.

"In this delightfully accessible book, Powers asks the questions we all need to ask in this digitally driven time. And teaches us to answer them for ourselves."--Maryanne Wolf, author of Proust and the Squid

Award-winning media critic William Powers has written for the Atlantic, the New York Times, the Washington Post, and McSweeney's, among other publications. He lives on Cape Cod with his wife, the author Martha Sherrill, and their son.

GOR002672924
Hamlet's Blackberry: Building a Good Life in a Connected World by Jr William Powers
Jr William Powers
Used - Very Good
Hardback
Scribe Publications
2010-06-28
267
0061687162
9780061687167
N/A
Book picture is for illustrative purposes only, actual binding, cover or edition may vary.
This is a used book - there is no escaping the fact it has been read by someone else and it will show signs of wear and previous use. Overall we expect it to be in very good condition, but if you are not entirely satisfied please get in touch with us.