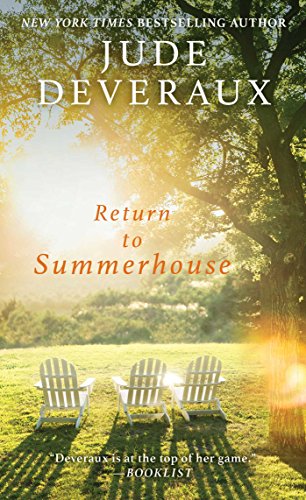 Return to Summerhouse
by Jude Deveraux

Return to Summerhouse by Jude Deveraux

The sequel to the bestselling THE SUMMERHOUSE tells the story of three women who are given the chance to go back in time and recreate their history. Amy is perfectionist with a wonderful husband and two young boys, but when she suffers a miscarriage, she suddenly realizes her life isn't as ideal as it seems on the outside. Faith, is in her 30s but looks years older. Her husband died a year ago, but she is really mourning another man - one she let go years ago. And Zoe, a painter, who dresses in black and has multiple piercings, suffered a brain injury and can't recall anything after her high school prom. All she knows is that she did something so horrible that her entire hometown hates her.

These three women, with nothing in common except for shared pain, are united one

weekend in a summerhouse in Maine. There they meet Madame Zoya and her sister Primrose who have mystical powers and give them the opportunity to alter their own histories. When Amy decides to return to 18th century Georgian England to see if she can change her husband's ancestor, the other women elect to go with her and all three are given a chance to create their own happily ever after.

Jude Deveraux is the author of forty New York Times bestsellers, including The Scent of Jasmine, Scarlet Nights, Days of Gold, Lavender Morning, Return to Summerhouse, and Secrets. To date, there are more than sixty million copies of her books in print worldwide. She lives in North Carolina. To learn more, visitwww.judedeveraux.com.