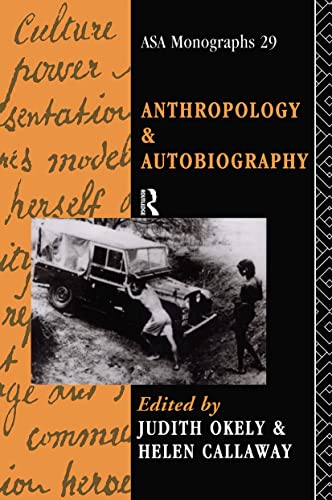 Anthropology and Autobiography
by Judith Okely

Out of Stock
$19.49
inc. GST
Provides insights into the validity of fieldwork autobiography and the textual critique of anthropologists, presenting new scope for the genre of autobiography and contributing to debates about reflexivity and political responsibility.
Very Good
Only 0 left

Anthropology and Autobiography by Judith Okely

Anthropological writings by anthropologists in the field have long been a valuable tool to the profession. But until now, the theoretical implications of its use have not been fully explored. Anthropology and Autobiography provides unique insights into the fieldwork, autobiographical materials and/or textual critiques of anthropologists, many of whose ethnographies are already familiar. It considers the role of the anthropologist as fieldworker and writer, examining the ways in which nationality, age, gender, and personal history influence the anthropologist's behavior towards the individuals he is observing. This volume also contributes to debates about reflexivity and the political responsibility of the anthropologist, who, as a participant, has traditionally made only stylized appearances in the academic text. The contributors examine their work among peoples in Africa, Japan, the Caribbean, Greece, Shetland, England, indigenous Australia, Indonesia, and Sri Lanka. Autobiography is developed alongside political, intellectual, and historical changes. The anthropologists confront and examine issues of racism, reciprocity and friendships. Anthropology and Autobiography will appeal to anthropologists and social scientists interested in ethnographic approaches, the self, reflexivity, qualitative methodology, and the production of texts.

"By struggling with the problems of reflexivity in the construction of fieldwork evidence, this volume of the ASA Monographs contributes a different approach to the postmodern preoccupation with the reflexive genre of anthropological writing. Recognizing the historicity of the anthropologist's self is at least a step forward in the process of acknowledging the historicity of others. "Anthropology and Autobiography should be of value to students and teachers interested in qualitative methodologies and in ethnographic approaches to the self."
-Blanca Muratorio, University of British Columbia

1. Anthropology and autobiography: participatory experience and embodied Knowledge Judith Okely 2. Ethnography and experience: gender implications in fieldwork and text Helen Callaway 3. Automythologies and the reconstruction of ageing Paul Spencer 4. Spirits and sex: a Swahili informant and his diary Pat Caplan 5. Putting out the life: from biography to ideology among the Earth People Roland Littlewood 6. Racism, terror and the production of Australian auto/biographies Julie Marcus 7. Writing ethnography: state of the art Kirsten Hastrup 8. Changing places and altered perspectives: research on a Greek island in the 60s and in the 80s Margaret Kenna 9. The paradox of friendship in the field: analysis of a long-term Anglo-Japanes relationship Joy Hendry 10. Ali and me: an essay in street corner anthropology Malcom Crick 11. From affect to analysis: the biography of an interaction in an English village Nigel Rapport 12. Self-conscious anthropology Anthony P. Cohen

GOR003009824
Anthropology and Autobiography by Judith Okely
Judith Okely
Used - Very Good
Paperback
Taylor & Francis Ltd
1992-07-02
268
0415051894
9780415051897
N/A
Book picture is for illustrative purposes only, actual binding, cover or edition may vary.
This is a used book - there is no escaping the fact it has been read by someone else and it will show signs of wear and previous use. Overall we expect it to be in very good condition, but if you are not entirely satisfied please get in touch with us.