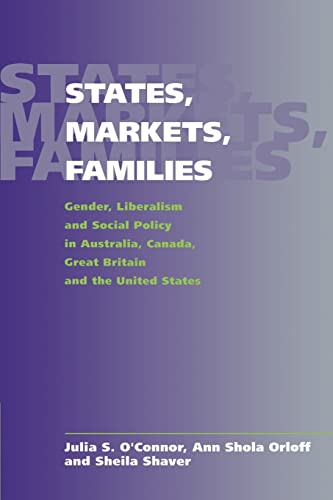 Used Price
20,99 $
inc. GST
Free Shipping in Australia
Three leading figures in the field make this important contribution to debates about social policy and gender relations in an era of economic restructuring and market liberalism. A thematic, comparative analysis of labor markets, income maintenance and reproductive rights, it considers Canada, the UK, US and Australia.
Reviews:
Trustpilot
Good Well Read

The 1990s have seen dramatic restructuring of state social provision in the US, the UK, Canada and Australia. This has occurred largely because of the rise of market liberalism, which challenges the role of the state. This important book examines the impact of changes in social policy regimes on gender roles and relations. Structured thematically and systematically comparative, it analyses three key policy areas: labor markets, income maintenance and reproductive rights. Largely driven by issues of equality, it considers the role of the state as a site for gender and sexual politics at a time when primacy is given to the market, developing an argument about social citizenship in the process. Eminent scholars in the field, Julia O'Connor, Ann Orloff and Sheila Shaver make a landmark contribution to debates about social policy and gender relations in this era of economic restructuring and deregulation.

"O'Connor, Orloff, and Shaver draw upon `mainstream' and feminist work (including their own earlier and significant scholarship) to provide an extremely well developed, sustained and interesting analysis of gender relations and social policy in four countries that represent the `liberal' world of welfare capitalism." Canadian Journal of of Sociology
"...a book that should move quickly into the canon of welfare state studies, with transformational effect." Lisa D. Brush, American Journal of Sociology
"This groundbreaking book brings together a wealth of information about the gendered effects of social policy in four conutries...This book can and should be read by anyone interested in gendering social policy analyses or in learning more about liberalism and social policy...State, Markets, Families makes a tremendous contribution to scholarship in the areas of gender and social policy, and of social policy more broadly...This volume is destined to become a classic and to inspire new analyses of gender and social policy for many decades to come." Governance July 2001