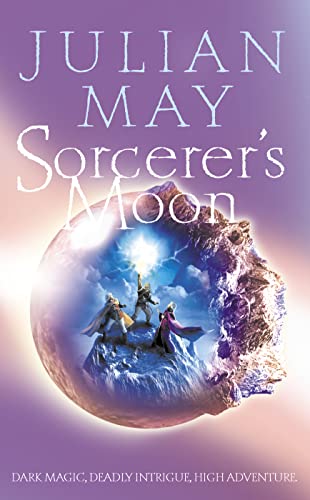 Sorcerer's Moon
by Julian May

The stunning conclusion to a powerful epic fantasy from the worldwide bestselling author of the Saga of the Pliocene Exile.

Sorcerer's Moon: Part Three of the Boreal Moon Tale by Julian May

The stunning conclusion to a powerful epic fantasy from the worldwide bestselling author of the Saga of the Pliocene Exile.

For sixteen years King Conrig Ironcrown has ruled High Blenholme, battling both to preserve the Sovereignty he ruthlessly established over the four provinces of the island kingdom and to repel the invading Salka monsters that threaten them all. His hope for the future is his heir, Prince Orrion, whose betrothal to a princess of the province of Didion should assure the future peace of High Blenholme. But Orrion has no interest in the girl, and is determined to marry instead his childhood sweetheart, Lady Nyla.

Orrion's madcap twin, Corodon, dreams up a scheme to keep Orry and Nyla together by asking the supernatural Beaconfolk, who appear as lights in the sky, for a magical intercession. The twins are unaware that the Beaconfolk are fighting their own battle with others of their kind; to them all humans, even princes, are but pawns to be used in their own conflict. Their granting of Orrion's wish comes in a manner the twins far from expected, and precipitates chaotic infighting amongst the folk of High Blenholme.

As battles rage both on the ground and in the sky, the only hopes for peace can be found deep in King Conrig's murky past. His former spy, Deveron Austrey, has secret magical powers and no love for the Beaconfolk. And while many of his subjects no longer remember the King's first wife, Maudrayne, she has never forgotten that her son is the true heir to the throne of High Blenholme.

`A gleefully complex festival of skulduggery, plotting and intrigue ... a cast of deliciously selfish characters ... a story that is essentially about how power - both political and magical - corrupts ... rollicking fun' DeathRay

Praise for Julian May:

`A writer of exceptional perception and power' JEAN AUEL

`Julian May has irrevocably placed herself among the greats' Asimov's magazine

Julian May is the author of the Saga of the Pliocene Exile (The Many-Coloured Land, The Golden Torc, The Nonborn King), The Galactic Millieu Trilogy, Black Trillium (with Marion Zimmer Bradley and Andre Norton), Blood Trillium and Sky Trillium, and most recently The Rampart Worlds. The author lives in the state of Washington.

GOR001432591
Sorcerer's Moon: Part Three of the Boreal Moon Tale by Julian May
Julian May
Used - Very Good
Paperback
HarperCollins Publishers
2007-08-06
656
0007123264
9780007123261
N/A
Book picture is for illustrative purposes only, actual binding, cover or edition may vary.
This is a used book - there is no escaping the fact it has been read by someone else and it will show signs of wear and previous use. Overall we expect it to be in very good condition, but if you are not entirely satisfied please get in touch with us.