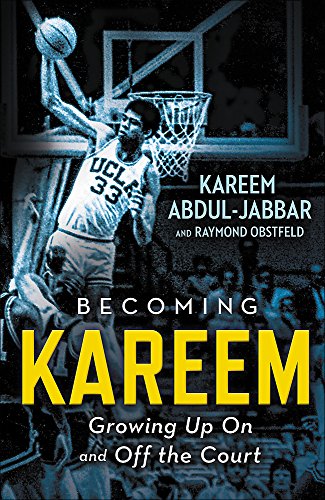 Becoming Kareem: Growing Up On and Off the Court by Kareem Abdul-Jabbar

In his first memoir written especially for young readers, Kareem Abdul-Jabbar will focus on his relationships with several important coaches in his life - including his father, his high-school coach and Coach Wooden - as he tells the story of his life and career.

Like many kids in elementary school, Kareem (then Lew Alcindor) struggled with fitting in, pleasing a strict father, and severe shyness that made him socially awkward. Unlike most kids, he also had to grapple with a sudden growth spurt that shot him up taller than pretty much everyone around him, including students, teachers, and even his own father. His increasing fame as a basketball player throughout high school brought new challenges as this shy boy was shoved into the national spotlight. At the same time, social unrest in the country, particularly involving the growing civil rights movement, tugged at his conscience as he tried to find his place in it. After all, he was just a kid. What could he do?

Recruited to UCLA, his fame as an unstoppable center made him a college superstar. But as his fame rose, so did the social turmoil in the country: Vietnam War protests, Malcolm X and the Nation of Islam, Dr. Martin Luther King, Jr., large-scale riots, the Women's Movement. He could have hidden from all the turmoil as a sports celebrity, but he chose to join in the social evolution. The result was converting to Islam and changing his name to Kareem Abdul-Jabbar. The public backlash was blistering, but he didn't waver.

"Kareem Abdul-Jabbar is... as gifted an intellect as he is an athlete... It's a tale by a wise elder-- about basketball, sure, but also about cultural, political, social, and religious awakenings, big stuff narrated in a very accessible way."--The New York Times Book Review
* "This timely and unforgettable memoir is essential for middle and high school collections, and affords rich opportunities for classroom and book club discussions."
--SLJ, starred review
* "In our current moment when black athletes are joining the national confrontation with the nation's overwhelming legacy of racial injustice, few are better suited to provide context than Abdul-Jabbar.... Wrestling with what it means to be black, determining his own responsibility and capacity to respond to injustice, and becoming the "kindest, gentlest, smartest, lovingest version" of himself takes center stage in this retelling of the early part of his life. Like the author's unstoppable skyhook, this timely book is a clear score."--Kirkus, starred review
* "More than a play-by-play sports story, it's an honest, powerful exposition of what it means to be black in white America, offering a de facto history of the civil rights movement."--Booklist, starred review

Kareem Abdul-Jabbar is the NBA's all-time leading scorer and a Basketball Hall of Fame inductee. Since retiring, he has been an actor, a basketball coach, and the author of many New York Times bestsellers. Abdul-Jabbar is also a columnist for many news outlets, such as The Guardian and The Hollywood Reporter, writing on a wide range of subjects including race, politics, age, and pop culture. In 2012, he was selected as a U.S. Cultural Ambassador and in 2016 Abdul-Jabbar was awarded the Presidential Medal of Freedom, the nation's highest civilian award which recognizes exceptional meritorious service. He lives in Southern Californi

GOR010793971
Becoming Kareem: Growing Up On and Off the Court by Kareem Abdul-Jabbar
Kareem Abdul-Jabbar
Used - Very Good
Hardback
Little, Brown & Company
2017-11-21
256
031655538X
9780316555388
N/A
Book picture is for illustrative purposes only, actual binding, cover or edition may vary.
This is a used book - there is no escaping the fact it has been read by someone else and it will show signs of wear and previous use. Overall we expect it to be in very good condition, but if you are not entirely satisfied please get in touch with us.