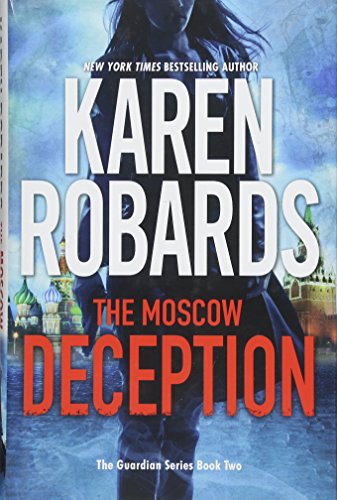 The Moscow Deception by Karen Robards

New York Times bestselling author Karen Robards is back with the second novel in her stunning new international thriller series.

The Moscow Deception: The Guardian Series Book 2 by Karen Robards

Clever. Cunning. Highly skilled. There's only one Bianca St. Ives. And for her enemies, that's one too many.

Bianca St. Ives - a highly skilled con-woman and thief - is in trouble. A revelation about her past has left her reeling, as well as making her the target of a network of assassins. Bianca was raised a fighter. She'll try and outsmart her pursuers, but if it's kill or be killed, she's got her finger flush against the trigger.

But then Bianca's father loops her in on a job that might just do the trick: recovering a collection of heavily guarded, priceless artifacts stolen during World War II, and return it to Germany. The price paid if she succeeds - intel that could finally bring down the shadowy forces seeking to bury her for good.

Faced with threats that circle closer with every move she makes, she knows the stakes have never been higher, but when you're already living on borrowed time, you have to hustle if you want to live to see tomorrow.

ORDER THE NEXT IN THE SERIES, THE FIFTH DOCTRINE, NOW

The action rarely lets up . . . The plot . . . will keep the readers turning the pages. - Publishers Weekly on THE LAST VICTIMThrilling - Booklist on THE LAST VICTIMRobards is one terrific storyteller - Chicago Tribune
Karen Robards is the internationally bestselling author of over fifty novels, which have regularly appeared on the New York Times, USA Today and Publishers Weekly bestseller lists, among others. She is the mother of three boys and lives with her family in her hometown of Louisville, Kentucky. You can find out more at www.karenrobards.com and on Facebook at www.facebook.com/AuthorKarenRobards or follow her on Twitter @TheKarenRobards.
GOR009184387
9781473647398
1473647398
The Moscow Deception: The Guardian Series Book 2 by Karen Robards
Karen Robards
The Guardian Series
Used - Like New
Hardback
Hodder & Stoughton
2018-06-14
352
N/A
Book picture is for illustrative purposes only, actual binding, cover or edition may vary.
The book has been read, but looks new. The book cover has no visible wear, and the dust jacket is included if applicable. No missing or damaged pages, no tears, possible very minimal creasing, no underlining or highlighting of text, and no writing in the margins
Trustpilot