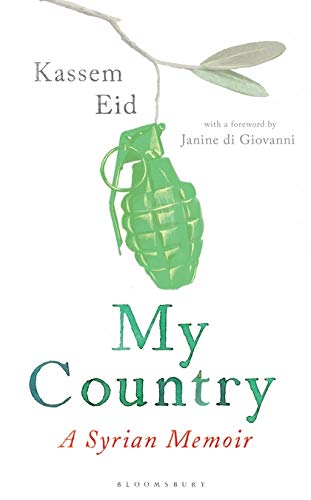 My Country
by Kassem Eid

My Country: A Syrian Memoir by Kassem Eid

An unforgettable memoir of growing up in Syria under al-Assad's regime, surviving a gas attack, and rallying worldwide support to break the siege of cities across the country, with a foreword by Janine di Giovanni Chosen for the Big Issue's Best Summer Non-fiction 2018 Born to Palestinian refugees, Kassem Eid grew up in the small town of Moadamiya on the outskirts of the ancient city of Damascus. The streets that he and his many siblings played on were perfumed with jasmine. A precocious child, he excelled at school, and had a natural gift for languages. But it didn't take long for Kassem to realise that he was treated differently at school because of his family's resistance to the brutal government regime. When Bashar al-Assad succeeded his father in 2000, hopes that he would ease its severity were swiftly crushed. When the 2011 Arab Spring protests in Syria were met with extreme violence, it was yet another blow - and as Kassem reached young adulthood, life in Syria became increasingly precarious, as the country spiralled into civil war. Then, on 21 August 2013, Kassem nearly died in a sarin gas attack that killed hundreds of civilians. Later that day, he would pick up a gun for the first time, to join the Free Syrian Army as they fought government forces. For Kassem, this marked the moment that he and his country changed forever. A searing account of oppression, war, survival and escape, My Country is both a brave and deeply felt memoir of one man's life, as well as a compelling indictment of a world that turned its face away as a nation fell apart.

A memoir of resistance and survival unique in the annals of modern war ... If the shedding of blood can be beautiful in words, he makes it so * Wall Street Journal *
An account of oppression, war, survival and escape as the world ignored what was going on. A touching tale, this humanises the story of war when often all we want to do is look away * Metro, The best new books by BME authors you'll be reading this year *
At last, here is the first wave of books written by Syrians not about their escape to Europe as refugees from the war but about their lives inside the country ... What emerges is a remarkably unified picture of the realities of life since 1970 in the Syria of the Assads ... shows, unambiguously, precisely what the Assad government seek to conceal * Times Literary Supplement *
Powerful ... Tightly-focused ... A first-person, eyewitness account written with alternating love and fury * Prospect *

Kassem Eid is a Palestinian-Syrian rebel and human rights activist. In 2014 he went on a speaking tour across the United States and testified before the United Nations Security Council. He has contributed to the New York Times, Washington Post and the Wall Street Journal, and was interviewed on 60 Minutes. He is currently a refugee living in Germany.

GOR009184417
My Country: A Syrian Memoir by Kassem Eid
Kassem Eid
Used - Like New
Hardback
Bloomsbury Publishing PLC
2018-05-17
224
1408895099
9781408895092
N/A
Book picture is for illustrative purposes only, actual binding, cover or edition may vary.
The book has been read, but looks new. The book cover has no visible wear, and the dust jacket is included if applicable. No missing or damaged pages, no tears, possible very minimal creasing, no underlining or highlighting of text, and no writing in the margins.