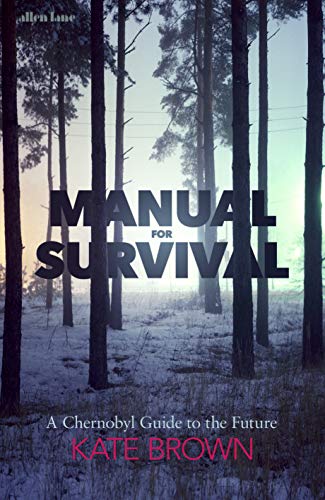 Manual for Survival by Kate Brown

Manual for Survival: A Chernobyl Guide to the Future by Kate Brown

'Remarkable . . . grips with the force of a thriller' Robert MacFarlane

The official death toll of the 1986 Chernobyl accident, 'the worst nuclear disaster in history', is only 54, and stories today commonly suggest that nature is thriving there. Yet award-winning historian Kate Brown uncovers a much more disturbing story, one in which radioactive isotopes caused hundreds of thousands of casualties, and the magnitude of this human and ecological catastrophe has been actively suppressed.

Based on a decade of archival and on-the-ground research, Manual for Survival is a gripping account of the consequences of nuclear radiation in the wake of Chernobyl - and the plot to cover it up. As Brown discovers, Soviet scientists, bureaucrats, and civilians documented staggering increases in cases of birth defects, child mortality, cancers and a multitude of life-altering diseases years after the disaster. Worried that this evidence would blow the lid on the effects of massive radiation release from weapons-testing during the Cold War, scientists and diplomats from international organizations, including the UN, tried to bury or discredit it. Yet Brown also encounters many everyday heroes, often women, who fought to bring attention to the ballooning health catastrophe, and adapt to life in a post-nuclear landscape, where dangerously radioactive radioactive berries, distorted trees and birth defects still persist today.

An astonishing historical detective story, Manual for Survival makes clear the irreversible impact of nuclear energy on every living thing, not just from Chernobyl, but from eight decades of radiaoactive fallout from weapons development.

A magisterial blend of historical research, investigative journalism and poetic reportage, Kate Brown sets out to uncover Chernobyl's true medical and environmental effects . . . an awe-inspiring journey. * The Economist *
This thrilling, frightening book tells the truth about the Chernobyl disaster . . . the most brilliant and essential book on Chernobyl since that of Nobel Prize winner Svetlana Alexievich. * The Irish Times *
An astonishing unconventional history. * The Times *
Brown's page-turner skilfully weaves an original narrative on the long-term medical effects of the Chernobyl disaster... Her capacity to immerse herself and pick up on nuances brings these stories from factory workers, technicians, doctors and villagers alive. * Nature *
Exemplary ... Brown is an indomitable researcher -- Luke Harding * Observer *
Full of passion . . . [an] admirable uncovering of the hidden story behind Chernobyl. * The Guardian *
Vital work, making a convincing case for the catastrophic long-term medical and ecological effects of the disaster -- Tobie Mathew * Literary Review *
A troubling book, passionately written and deeply researched ... the book moves from science to thriller and realm of conspiracy... there is no doubt about Brown's gift for vivid narrative. Her conclusion is chilling. * The Sunday Times *
A humane book about the irreversible things a technological disaster does to people and landscapes. * Owen Hatherley, New Statesman, 'Best Books of 2019' *
A magnificent monograph that stands out among the multiple books on Chernobyl simply because it tells us the truth - the whole unadulterated truth - about one of the worst disasters in history. As such, it may itself be regarded as a survival manual of sorts. And a guide to the future, too. * Engineering and Technology *
Help[s] us comprehend, both emotionally and rationally, a disaster so great that future scholars will detect it thousands years from now, whether they have written accounts of it or not. * The Evening Standard *
Kate Brown [...] shows that there are still many ways to tell this story, and that the lessons of Chernobyl remain unresolved ... Brown argues persuasively that [researchers] are grossly underestimating the scale of the damage. * The New York Review *
Manual For Survival is a remarkable book, distinguished by Kate Brown's rare combination of skills: formidable archival history, investigative research, and vivid storytelling. There are parts of this book that grip with the force of a thriller - but again and again, the plot is proved true. A decade's work has gone into uncovering the real human cost of Chernobyl. This is a book about even bigger subjects than the disaster at its core, however: about how politics processes disaster, about the unseen legacies of the 'friendly atom', and about the Anthropocene futures faced by the human species, surviving in an epoch of ruin.
This deftly written, impassioned, courageous book should make the world think twice about what's at stake when we unleash nuclear reactions.
Kate Brown presents a convincing challenge to the official narrative of the Chernobyl disaster. Deeply reported and elegantly written, "Manual for Survival" is chilling.
Combining the skills of a historian, investigative reporter, and detective Kate Brown has blown the lid off the 1986 Chernobyl nuclear disaster and decades of official efforts to suppress its grim truths. Disturbing in its conclusions, destined to incite controversy, Manual for Survival is first-rate historical sleuthing.
Gripping . . . Kate Brown's relentless, tenacious reporting shows that Chernobyl isn't the past at all. Nothing, she makes clear, can stop its radiation from seeping through all attempts to bury the truth, for a long time to come. This deftly written, impassioned, courageous book should make the world think twice about what's at stake when we unleash nuclear reactions.
This engagingly written book reads like a cold war thriller and uncovers the devastating effects of one of the world's worst nuclear disasters.
Kate Brown is the author of A Biography of No Place, which won the George Louis Beer Prize from the American Historical Association for the best book in International History, and Plutopia, which won seven awards, including the Dunning and Beveridge prizes from the American Historical Association for the best book in American history. She is the first historian of the Soviet Union to be nominated to the honorary Society of American Historians, and her research has been funded by the American Academy in Berlin and by Carnegie and Guggenheim fellowships. She teaches environmental and nuclear history at the Massachusetts Institute of Technology, Baltimore County, and lives in Washington, DC.
GOR009737960
9780241352069
0241352061
Manual for Survival: A Chernobyl Guide to the Future by Kate Brown
Kate Brown
Used - Very Good
Hardback
Penguin Books Ltd
2019-03-12
432
N/A
Book picture is for illustrative purposes only, actual binding, cover or edition may vary.
This is a used book - there is no escaping the fact it has been read by someone else and it will show signs of wear and previous use. Overall we expect it to be in very good condition, but if you are not entirely satisfied please get in touch with us
Trustpilot