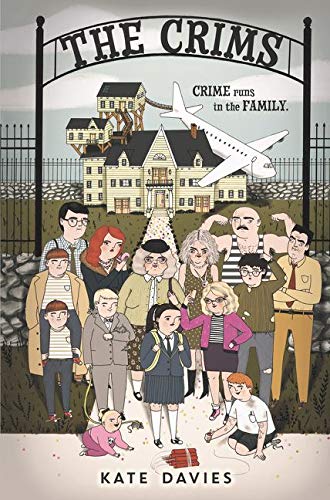 The Crims
by Kate Davies

The Addams Family meets Despicable Me in the first book of this new trilogy, perfect for fans of Lemony Snicket and Pseudonymous Bosch!

The Crim family is full of notorious criminals.

The Crims by Kate Davies

The Addams Family meets Despicable Me in the first book of this new trilogy, perfect for fans of Lemony Snicket and Pseudonymous Bosch!

The Crim family is full of notorious criminals. Notoriously inept, that is. Uncle Knuckles once tried to steal a carnival. Great-Uncle Bernard held himself hostage by accident. Aunt Drusilla died slipping on a banana peel. But Imogen is different. She was born with a skill for scandal. A knack for the nefarious. A mastery of misdemeanors.

Despite her natural talent for all things unlawful, Imogen got out of the family business years ago. But when the rest of the Crims are accused of pulling off a major heist-which seems doubtful, to say the least-Imogen is forced to step in to clear their names. Because only a truly skilled criminal can prove the bumbling family's innocence....

Kate Davies lives in London, where she writes children's books, performs improv comedy, and spends too much money on cheese. She also edits other people's children's books and she once worked at Buckingham Palace, selling tea towels to tourists. She never met the queen, but she did get to stroke a corgi once.

GOR010106222
The Crims by Kate Davies
Kate Davies
Crims
Used - Very Good
Paperback
HarperCollins Publishers Inc
2018-12-05
320
0062494104
9780062494108
N/A
Book picture is for illustrative purposes only, actual binding, cover or edition may vary.
This is a used book - there is no escaping the fact it has been read by someone else and it will show signs of wear and previous use. Overall we expect it to be in very good condition, but if you are not entirely satisfied please get in touch with us.