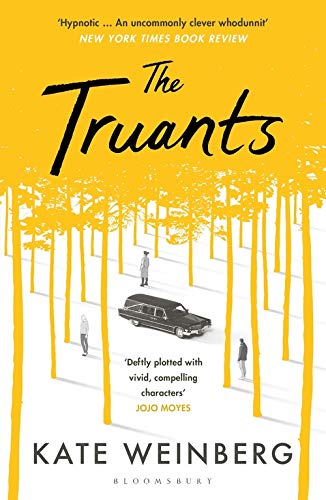 'Hypnotic . . . An uncommonly clever whodunnit' New York Times Book Review 'The best novel I've read in years' Fearne Cotton 'Deftly plotted with vivid, compelling characters' Jojo Moyes 'One of the standout books of the summer' Stylist 'In the vein of Agatha Christie herself. Startling' Irish Times A captivating debut about obsession, rivalry and coming of age - an Observer, i and New York Times Book of the Year Jess Walker, middle child of a middle class family, has perfected the art of vanishing in plain sight. But when she arrives at a concrete university campus under flat, grey, East Anglian skies, her world flares with colour. Drawn into a tightly-knit group of rule breakers - led by their maverick teacher, Lorna Clay - Jess begins to experiment with a new version of herself. But the dynamic between the friends begins to darken as they share secrets, lovers and finally a tragedy. Soon Jess is thrown up against the question she fears most: what is the true cost of an extraordinary life?
The Truants marks Weinberg out as a natural storyteller, in the vein of Agatha Christie herself. Startling * Irish Times *
A coming-of-age story and campus novel rolled into one . . . With deft characterisation, plenty of mystery and twists in the tale, it had me gripped * Daily Mail *
As much a coming-of-age tale as a murder mystery . . . An impressive debut * The Times *
Like a wickedly brilliant Donna Tartt, Agatha Christie and Liane Moriarty all mixed into one -- Scarlett Curtis
Weinberg's debut is a page-turning tale of love, death and betrayal on a university campus that riffs on Donna Tartt's The Secret History while exerting a subtle pull of its own * i, Books of the Year *
After surprising twists, Kate Weinberg provides a satisfying conclusion while asking the question: does a mystery lose its magic once it's solved? * Guardian *
Think The Secret History meets Agatha Christie * Red *
A must read for fans of mystery novels . . . Cleverly written and relentlessly intriguing, The Truants is the perfect novel for inquisitive minds to escape into * Marie Claire *
In this mesmerising debut, Kate Weinberg confidently combines literary suspense and deftly executed narrative, slowly unravelling a tangled tale about first love, obsession and the boundaries of self-identity . . . A riveting read * Scotsman *
This satisfying coming-of-age novel jives to a thriller-like beat. It's a debut, though you wouldn't necessarily know it from its assured tone. While Donna Tartt's The Secret History is a clear influence, it's Agatha Christie whose work is most explicitly referenced, stoking an ominous sense of impending calamity * Mail on Sunday *
There are more than a few nods to Donna Tartt's The Secret History here - the band of student misfits with dysfunctional backgrounds, the professor with oddly intimate student-teacher bonds, plus an overall sense, skilfully seeded by Weinberg, that things are about to take a wrong turn ... Threaded into the story are references to Agatha Christie's novels, with their mysteries and murders and love triangles. The Truants borrows some of these murder mystery tropes, leading us to a dark conclusion that feels satisfying to reach * Evening Standard *
Set to be the book of the summer * Town & Country *
The book you'll fall in love with. With a small band of overly intimate students, a mysterious-yet-inspiring tutor, obsession and a whodunit, there's much to place it in the same bracket as Donna Tartt but there are also nods to a much-mentioned Agatha Christie. There's also an ending that'll leave you thinking and thinking about this plot for weeks, if not months, later; one of the standout books of the summer * Stylist *
You know those summer books which draw you in immediately and unyieldingly into their world? That bury you into the characters so nose-deep that when you're finished, they leave you yearning for the intimate world you've just left. Well, The Truants, a debut novel by Kate Weinberg, is exactly one of these. We couldn't put it down -- A Little Bird
This is a remarkably assured debut, deftly plotted and with vivid, compelling characters that leap off the page. I had no idea where it was going to end up - but I knew I would be satisfied, and I was. I look forward to seeing what Kate Weinberg writes next * Jojo Moyes *
In this mesmerising debut, Kate Weinberg confidently combines literary suspense and deftly executed narrative, slowly unravelling each thread that tangles first-love, obsession and the boundaries of self-identity. The Truants is as charismatic as the characters within. A riveting read * The Herald *
Weinberg weaves intrigue worthy of Agatha Christie - you'll love getting lost in The Truants' web of mystery, desire and deceit * M. L. Rio, author of If We Were Villains *
The Truants teases, seduces and thrills but ultimately it's about the best kind of love affair - allowing for the freedom to be yourself * Miranda Hart *
Lays bare the lengths to which we will go to feel seen ... At once thrilling and heartbreaking * Meghan MacLean Weir, author of The Book of Essie *
Reminiscent of Muriel Spark and Donna Tartt. A stunning debut! * Carol Goodman, author of The Lake of Dead Languages and The Night Visitors *
Kate Weinberg was born and lives in London. She studied English at Oxford and creative writing in East Anglia. She has worked as a slush pile reader, a bookshop assistant, a journalist and a ghost writer. The Truants is her first novel.
GOR010584476
9781526600134
1526600137
The Truants by Kate Weinberg
Kate Weinberg
Used - Very Good
Paperback
Bloomsbury Publishing PLC
2020-06-01
352
N/A
Book picture is for illustrative purposes only, actual binding, cover or edition may vary.
This is a used book - there is no escaping the fact it has been read by someone else and it will show signs of wear and previous use. Overall we expect it to be in very good condition, but if you are not entirely satisfied please get in touch with us
Trustpilot