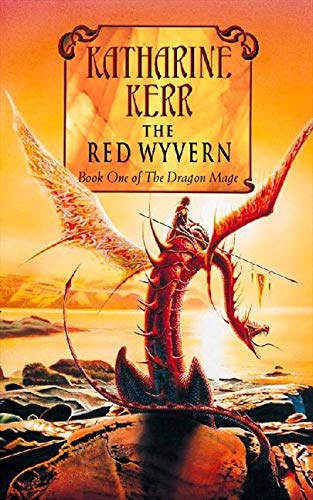 The Red Wyvern
by Katharine Kerr

The Red Wyvern (The Dragon Mage, Book 1) by Katharine Kerr

A new chapter of the history of the kingdom of Deverry - an ideal starting point for newcomers to Katharine Kerr's gorgeous epic, and a satisfying continuation of the saga for those readers who have followed the series through its previous incarnations.

In Cengarn, Rhodry of the silver daggers - half-elven, half-human - is beset by strange dreams. A dark-haired enchantress, the Raven Woman, is haunting his sleep, and he can find no release, even in the arms of Dallandra, his lover. Little does he know that his feud with the Raven Woman goes back over three hundred years, to a time when the very throne of Deverry stood under threat of civil war.

`Kerr is a master of her trade... She has created a world that might very well go on for ever, and this one reader sincerely hopes it does'
VECTOR

`One of the top fantasists of her generation'
INTERZONE

Katharine Kerr was born in Ohio in 1944. Her fascination for all things Celtic and her extensive reading of mediaeval and Dark ages history have had a direct influence on the direction of her fantasy writing. Her novels have been published around the world and she is a bestseller on both sides of the Atlantic.

GOR001292923
The Red Wyvern (The Dragon Mage, Book 1) by Katharine Kerr
Katharine Kerr
The Dragon Mage
Used - Very Good
Paperback
HarperCollins Publishers
1998-02-16
416
0006478603
9780006478607
N/A
Book picture is for illustrative purposes only, actual binding, cover or edition may vary.
This is a used book - there is no escaping the fact it has been read by someone else and it will show signs of wear and previous use. Overall we expect it to be in very good condition, but if you are not entirely satisfied please get in touch with us.