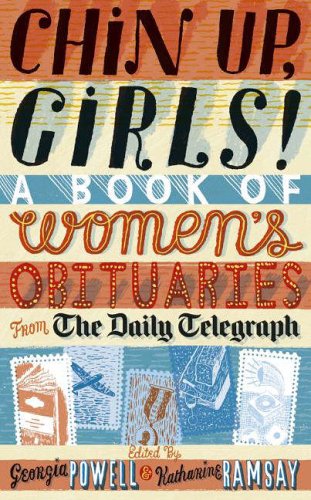 Chin Up, Girls! by Katharine Ramsay

An inimitable collection of outrageous and unforgettable twentieth-century lives

Chin Up, Girls! by Katharine Ramsay

From the self-styled 'Queen of Soho' who sued BA, claiming to have been bitten on the bottom by a flea, to the butcher's daughter from Oldham who performed topless as 'the world's strongest woman' before becoming becoming the mistress of a peer whom she met while living in a Pyrennean mountain hut, this is a celebration of the women who refused to fulfil society's expectations. Their company includes the woman who survived four months adrift in a dinghy in the Pacific and the woman who played professional polo disguised as a man for fifteen years, as well as the inimitable Dame Barbara Cartland and Fanny Cradock. And there are over one hundred more.

This is the first time that the Daily Telegraph has dedicated a book to women's stories; very few of the women featured were 'celebrities', yet their stories represent a century of progress and change, capturing the spirit of those who came of age between Emancipation and the Equal Opportunities Act, whether high life or low life, pioneers or bluestockings.

Taking its title from the inspiring lines of a matron whose nurses faced a WWII firing squad, this is a fascinating portrayal of unforgettable and extraordinary characters united by their refusal to accept society's constraints.

A glorious compilation, with enough material for 100 biographies * Sue Baker, Publishing News *
'I gleaned as much fun from the wit and style of the writing as I did from the lives of the subjects' * The Spectator *
'The collection salutes the spirit of these heroines, trailblazers, adventuresses and battleaxes, and captures their inspiring stories' * Daily Telegraph (Telegraph books direct advert) *
'If obituaries are the first draft of biography, there are many absorbing lives here ... neat and spicy' * Joan Bakewell, New Statesman *
'Two outstanding talents... Celebrates 93 astounding 20th-century lives' * Country Life *
'The joy of this book is in finding out how strange our fellow creatures can be, how admirable, how foolish, how inspiring' * The Herald *
'A collection of...extraordinary lives. Would that we could all be so memorable once dead' * Beryl Bainbridge, Mail on Sunday *
'Fascinating' * The Week *
' This book celebrates both doughty lives and less bland times' * Jeremy Jehu, Daily Telegraph *
'Chin Up, Girls! provide[s] fond memories of the departed, while at the same time emphasising what joy an eventful life can be' * Birmingham Sunday Mercury *
'Wonderful bedside reading' * Tom Boncza-Tomaszewski, Independent on Sunday *
Katharine Ramsay read history at Cambridge and worked as a member of the Number 10 Policy Unit under John Major. She joined the Daily Telegraph obituaries desk in 1997 and is married with two children. Georgia Powell was educated at University College, Oxford. She has worked on television documentaries for the BBC and Channel Four and joined the Daily Telegraph obituaries desk in 2000. She is married with two children.
GOR001376854
9780719563010
0719563011
Chin Up, Girls! by Katharine Ramsay
Katharine Ramsay
Used - Very Good
Paperback
Hodder & Stoughton General Division
2006-09-07
368
N/A
Book picture is for illustrative purposes only, actual binding, cover or edition may vary.
This is a used book - there is no escaping the fact it has been read by someone else and it will show signs of wear and previous use. Overall we expect it to be in very good condition, but if you are not entirely satisfied please get in touch with us
Trustpilot