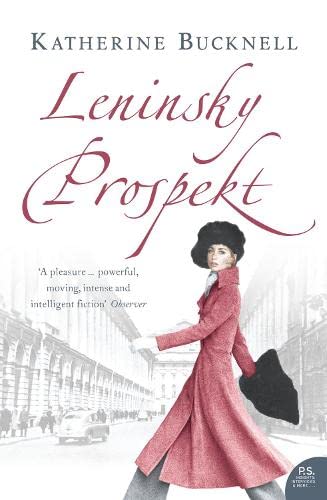 In October 1962, Nikita Kruschchev and John Kennedy confronted each other over the deployment of Russian missiles in Cuba, and the world came as close as it has ever been to nuclear holocaust. During the crisis, the New York City Ballet, led by the Russian-born choreographer, George Balanchine, was performing in Moscow. And the dissident movement was taking hold among certain members of the Soviet intelligentsia. Nina Davenport, the lonely bride of a gifted, increasingly preoccupied American diplomat, struggled to come to terms with her new circumstances.

Raised in Moscow, once a ballet student at the Bolshoi, Nina made an unprecedented escape to the West in the 1950s - by tricking the authorities. Ties to the past were severed, but never resolved. Her return to the Soviet Union is reckless at best; now, at the height of a world crisis, she confronts the demons of her traumatic girlhood. Hemmed in by official diplomatic restraints, followed everywhere by spies, longing to make contact with old friends, she becomes the tool of figures within the American Embassy who have a surprising agenda of which the world knows nothing.

`Leninsky Prospekt' brings vividly to life a period of anxieties that resonates with our own fraught times, as the characters, both real and imaginary, are stretched to the breaking point by political events. Katherine Bucknell's first novel, `Canarino', was richly praised; this, her second, is explosive, psychologically astute and deeply moving.

`High-octane ... Powerful ... A convincing and at times touching portrait of the evolution of a young marriage: the joy and idealism of falling in love followed by the insecurities and misunderstandings that unfold as husband and wife really get to know one another (in circumstances that would tax the best of us). Nina, fragile, troubled, beautiful and defiant, is an appealing heroine.' Sunday Times

`It is always a pleasure to encounter an author who tackles big ideas, complex relationships, ambitious themes, and has a woman as the protagonist. Bucknell has in abundance the resources to write powerful, moving, intense and intelligent fiction.' Linda Grant, Observer

`Bucknell swathes her beautiful yet selfish heroine in the poisonous mist of Soviet oppression; she brings a vanished period to life with subtlety and makes Nina a heroine worthy of a complex situation.' Metro

Katherine Bucknell was born in Saigon and grew up in Washington, D.C. She is a literary scholar and the editor of `Juvenilia: Poems 1922-1928' by W.H. Auden and of `Diaries Volume One, 1939-1960' and `Lost Years: A Memoir 1945-1951' both by Christopher Isherwood. Her novels are `Canarino', `Leninsky Prospekt', and `What You Will'. She lives in London with her husband and their three children.

GOR001432772
Leninsky Prospekt by Katherine Bucknell
Katherine Bucknell
Used - Very Good
Paperback
HarperCollins Publishers
2006-09-04
352
0007178689
9780007178681
N/A
Book picture is for illustrative purposes only, actual binding, cover or edition may vary.
This is a used book - there is no escaping the fact it has been read by someone else and it will show signs of wear and previous use. Overall we expect it to be in very good condition, but if you are not entirely satisfied please get in touch with us.