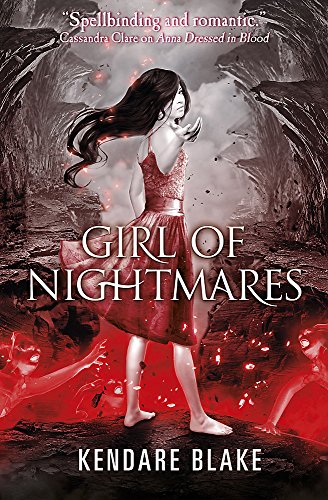 Girl of Nightmares
by Kendare Blake

Used Price
$31.99
inc. GST
Free Shipping in Australia
Just you average boy-meets-girl, girl gets sucked into Hell story ... This is Kendare Blake's follow-up to the thrillingly creepy romance that was Anna Dressed in Blood
Reviews:
Trustpilot
Like New Very Good

Girl of Nightmares by Kendare Blake

Just you average boy-meets-girl, girl gets sucked into Hell story ... This is Kendare Blake's follow-up to the thrillingly creepy romance that was Anna Dressed in Blood.

Cas Lowood is no ordinary ghost hunter - he's in love with a dead girl.

Her name is Anna Korlov. Anna Dressed in Blood. The girl who sacrificed herself to save his life. Racked with guilt, Cas sets out to do what he does best - hunt a ghost. But this time his aim is not to kill. He must rescue Anna from the depths of Hell.

But Hell is also home to a creature Cas has battled before ...

PRAISE FOR ANNA DRESSED IN BLOOD:
'Anna Dressed in Blood is a dark and intricate tale, with a hero who kills the dead but is half in love with death himself. By the end of the book, you will be too. Spellbinding and romantic.' Cassandra Clare, No. 1 New York Times bestselling author of the Mortal Instruments series

'It's the old boy-meets-girl story, if the boy is a wry, self-destructive ghost-hunter bent on avenging his father and the girl is a homicidal ghost trapped in a house full of everyone she's ever murdered. Needless to say, Cas and Anna are my new favorite twosome. When I got to the last page, I flipped back to the first.' Holly Black, New York Times bestselling author of Red Glove

Kendare Blake is an import from South Korea who was raised in the United States. She received a Bachelor's degree in Business from Ithaca College and a Master's degree in Writing from Middlesex University in London. She brakes for animals, the largest of which was a deer, which sadly didn't make it, and the smallest of which was a mouse, which did, but it took forever. Amongst her likes are Greek Mythology, rare red meat and veganism. She also enjoys girls who can think with the boys like Ayn Rand, and boys who scare the morality into people, like Bret Easton Ellis.

GOR008738541
Girl of Nightmares by Kendare Blake
Kendare Blake
Used - Like New
Paperback
Hachette Children's Group
2013-03-07
384
1408326124
9781408326121
N/A
Book picture is for illustrative purposes only, actual binding, cover or edition may vary.
The book has been read, but looks new. The book cover has no visible wear, and the dust jacket is included if applicable. No missing or damaged pages, no tears, possible very minimal creasing, no underlining or highlighting of text, and no writing in the margins.