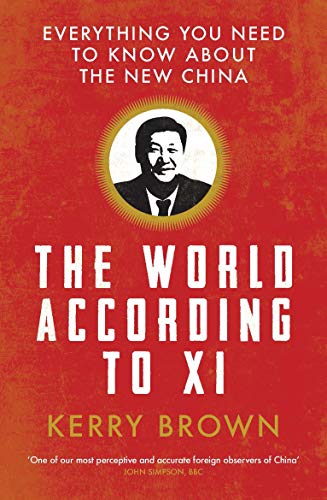 The World According to Xi
by Kerry Brown (King's College London, UK)

Meet the most powerful man in China, now in the Constitution - the first ruler since Mao to achieve that. A handy primer on the many facets of the world leader's views.

The World According to Xi Summary

The World According to Xi: Everything You Need to Know About the New China by Kerry Brown (King's College London, UK)

China is now the most powerful country on earth. Its manufacturing underpins the world's economy; its military is growing at the fastest rate of any nation and its leader - Xi Jinping - is to set the pace and tone of world affairs for decades. In 2017 Xi Jinping became part of the constitution - an honour not seen since Chairman Mao. Here, China expert Kerry Brown guides us through the world according to Xi: his plans to make China the most powerful country on earth and to eradicate poverty for its citizens. In this captivating book we discover Xi's beliefs, how he thinks about communism, and how far he is willing to go to defend it.

Customer Reviews - The World According to Xi

Kerry Brown is the Director of the Lau China Institute at King's College London and Associate for Chinese Affairs at Chatham House. With 30 years experience of life in China, he has worked in education, business and government, including a term as First Secretary at the British Embassy in Beijing. He writes regularly for the Times Literary Supplement, The Observer, The Diplomat and Foreign Affairs, as well as for many international and Chinese media outlets. He is the Amazon-bestselling author of China's World (I.B.Tauris, 2017), CEO China (I.B.Tauris, 2016) andThe New Emperors (I.B.Tauris, 2014). His other books include Contemporary China (2012), Friends and Enemies: The Past, Present and Future of the Communist Party of China (with Will Hutton, 2009) and Struggling Giant: China in the 21st Century (with Jonathan Fenby, 2007).

GOR009277536
The World According to Xi: Everything You Need to Know About the New China by Kerry Brown (King's College London, UK)
Kerry Brown (King's College London, UK)
Used - Very Good
Paperback
Bloomsbury Publishing PLC
2018-03-12
160
1788313283
9781788313285
N/A
Book picture is for illustrative purposes only, actual binding, cover or edition may vary.
This is a used book - there is no escaping the fact it has been read by someone else and it will show signs of wear and previous use. Overall we expect it to be in very good condition, but if you are not entirely satisfied please get in touch with us.